Despite the recent UK sovereign debt downgrade, the UK equity market offers a good combination of high yield and solid dividend growth. That combination promises to produce respectable returns over time. Moreover, the strategy based on that combination looks appropriate for investors seeking current income, an inflation hedge, and a margin of safety in possible market downturns. While there are plenty of UK dividend stocks for investors to choose from, a select few called Dividend Aristocrats, which meet the aforementioned investment objective, stand out because of the quality and sustainability of their dividends over time.

Let’s start with the UK dividend yield and growth prospects. While aggregate UK dividends, excluding special dividends and the early payment of HSBC’s (NYSE: HBC)(LSE: HSBA) dividend, grew 8.9% last year, this year they are projected to increase 6.8%, according to the latest Capita Registrars’ “Capita UK Dividend Monitor.” While more modest, this projected UK rate of dividend growth will still exceed the projected rate of U.S. dividend growth of about 4.0% for the year as a whole. Moreover, the average dividend yield on the UK equities of 4.5% gross is more than double that of the U.S. equities of 2.2%, as indicated by the average yields of the FTSE 100 and the S&P 500 indices.
Now, as regards the UK Dividend Aristocrats, they represent the top of the crops of the UK dividend stocks. UK Dividend Aristocrats are high yielders with consistent dividend growth or stable dividends for at least 10 consecutive years. Dividend Aristocrats also must have a non-negative dividend payout ratio and a float-adjusted market capitalization of at least $1 billion. Below is a closer look at five UK stocks, members of the S&P UK High Yield Dividend Aristocrats Index, that boast attractive yields, solid prospects for dividend growth, and an upside potential. All five selected stock trade as ADR on the U.S. exchanges. 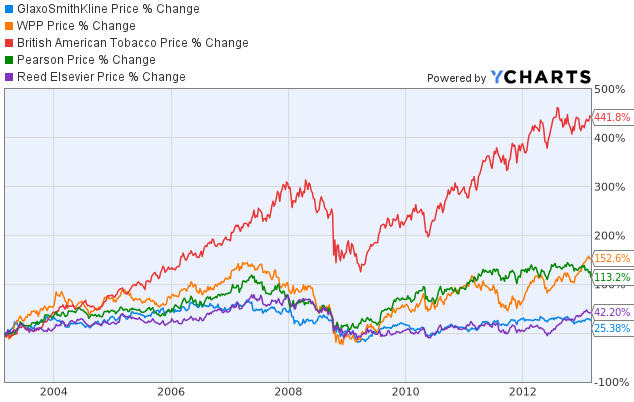 GlaxoSmithKline (NYSE: GSK)(LSE: GSK), a UK diversified pharmaceutical giant and one of Warren Buffett’s holdings, is currently yielding 5.1% on a payout ratio of 82%. Its five-year dividend growth has averaged 3.2% annually. However, GSK’s latest fourth-quarter (February) dividend was 4.8% higher than in the same quarter the year earlier. For the year as a whole, the regular dividend was 6% higher than in 2011. Although the company has seen strong competition from generic drugs amid patent expirations, the company has a robust pipeline of products that promise to generate strong growth in the future. This year, GSK plans to seek approvals from regulators for four new medicines. Over the next three years, the company has a potential to launch 15 new products globally. GSK’s long-term EPS CAGR of 6.1% is more robust that the forecasted EPS growth rates of its peers. The company’s share buyback policy –targeting $1.5-$3.0 billion in share repurchases in 2013– is supporting the EPS expansion. GSK has a return on equity of 66% and is trading at 13.8x forward earnings.

WPP (NYSE: WPPGY)(LSE: WPP) is the world’s biggest advertising company. It pays a dividend yield of 2.7% on a payout ratio of 44%. Over the past five years, the company has raised dividends at an annualized rate of 16.2%. Its 2012 dividend was 16% higher than in 2011. The company recently posted a 3.5% increase in total revenues for 2012 as a whole, with like-for-like revenues growing 2.9%. Adjusted profits, excluding one-time items, increased 12.1% year-over-year. This year, WPP expects to see like-for-like revenue growth of about 3%, an improvement compared to its previous guidance and analyst expectations. Its long-term EPS CAGR is forecasted at about 9.0% for the next five years. While WPP’s market outlook has improved, growth prospects are likely to improve further in 2014 due to the soccer World Cup in Brazil and the Winter Olympics. The stock has a ROE of 13.13%, well above its industry’s 9.05%. WPP is trading at 15.9x trailing earnings and a whopping 27.5x forward earnings. Still, the stock is undervalued based on a price-to-book of only 1.9 versus the ratio of 3.4 for its industry.

British American Tobacco (NYSE: BTI)(LSE: BATS) is the marketer of cigarettes in 180 markets worldwide. Its top brands include Dunhill, Kent, Lucky Strike and Pall Mall. The company pays a dividend yield of 3.9% on a payout ratio of 67%. BTI’s dividends have grown at an annualized rate of 15.3% over the past five years. The company increased its full-year 2012 dividend by 7% from 2011. In a recently disclosed financial report for 2012, BTI reported revenues at constant rates of exchange that were 4% higher than in 2011, but 1% down when adjusted for foreign exchange rates. Basic EPS was up 26%. Despite the adverse regulatory environment, the company has good pricing momentum. The demand for its products is relatively inelastic. Analysts predict BTI’s long-term EPS CAGR at about 10%, higher than the forecasted rates of growth of all its major peers, except for Philip Morris International (NYSE: PM). Strong share buybacks –to the order of $2.3 billion this year– are also buttressing the EPS expansion. BTI has an excellent ROE of 39.6% and is trading at 23.9x forward earnings, a significantly higher multiple than PM’s.

Pearson (NYSE: PSO)(LSE: PSON) is an international media and education company, focused on education, business information, and publishing. It is known as the owner of Financial Times. The stock is yielding 3.8% on a payout ratio of 53% of adjusted EPS. The company’s dividend has risen at an average annualized rate of 7.3% annually over the past five years. Last year, its dividend increased 7% over that in 2011. The company is experiencing headwinds from weak market conditions in developed world and in print publishing. Its overall growth will be driven by emerging markets growth, digital and services businesses, and education driven by rising middle class around the world. The company sees operational performance flat with that in 2012, as challenging market conditions prevail this year. In the long run, its EPS will grow at a CAGR of about 5.6%. However, despite modest growth, the stock represents a good value play. It trades at a trailing P/E of 9.7x versus 25.6x for its industry on average. PSO’s price-to-book of 1.6 is a major discount to the industry average ratio of 3.4.

Reed Elsevier (NYSE: RUK)(LSE: REL), a provider of professional information solutions worldwide, pays a dividend yield of 3.2% on a payout ratio of 48%. Over the past five years, its dividends have grown at an average annualized rate of 4.1%. The company recently reported a 4% growth in 2012 revenues and a 7% increase in adjusted EPS. Revenue gains are driven by organic volume growth, new products, and emerging market expansion. Reed Elsevier also hiked its 2012 dividend by 7% from that in 2011. The company expects to complete some $450 million of share buybacks for the rest of this year. With organic growth and share buybacks, its EPS will keep expanding. Analysts expect the company’s long-term EPS CAGR at 5.1%. The stock has a rich ROE of 45%, some four times better than its industry’s average rate. It is trading at a trailing P/E of 15.3x, below its industry.