4 Dividend Stocks That Give You a Clean Taste

Introduction
Since I like to take good care of my teeth, I use mouthwash after brushing. While gargling, I was annoyed that every time I screwed the cap back on the bottle of Listerine® (I drink from the cap, yes), a little bit of mouthwash dripped from the cap on the bottle and the shelf, making it all very sticky. The previous bottle of mouthwash I used was Elmex Sensitive. For some of you an unknown brand maybe, but they really did something very clever: they made a little drinking tube inside the cap! Lo and behold, no more mouthwash dripping out, no more sticky bottles!
What does this have to do with dividend investing? Well... nothing really. But it gave me the idea to take a look at the companies behind all those bottles of mouthwash and see how they're doing, dividend-wise. So here we go.

How to invest in a clean taste?
Since this website is about dividend investing, the focus will be on stocks paying out dividend. Luckily, most producers of mouthwash are well-known companies and listed on the New York Stock Exchange: Colgate Palmolive (NYSE: CL), GlaxoSmithKline (NYSE: GSK), Jonhson & Johnson (NYSE: JNJ) and Procter & Gamble (NYSE: PG). All companies except GlaxoSmithKline are also S&P 500 Dividend Aristocrats.

Colgate Palmolive
Colgate Palmolive is owner of the GABA Group, which produces Aronal, Elmex and Meridol mouth-/dental rinses in Therwil, Switzerland. Colgate Palmolive had a net income of USD 2.5 billion in the last 12 months and has paid uninterrupted dividends on its common stock since 1895 and increased payments to common shareholders every year for 48 years.

GlaxoSmithKline
GSK produces mouthwash under the name of Astring-O-Sol, made famous by model Joey Eastwood in the kissing booth TV commercial. GSK had a net income of GBP 3.3 billion (~USD 5 billion) in the last 12 months.
The graphs below show the Earnings Per Share (EPS) and Dividend Per Share of GSK. 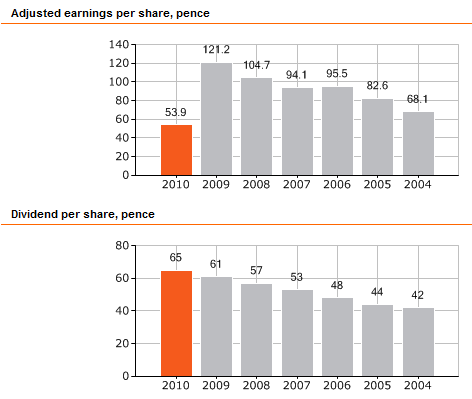 Jonhson & Johnson
In 2006, Listerine® became a JNJ product with the acquiring of Pfizer Consumer Healthcare. Listerine® Antiseptic was created in 1879, making it the first-ever antiseptic mouthwash. JNJ is the world's sixth-largest consumer health company with a net income of USD 64 billion in the last 12 months. The JNJ stock has seen 49 consecutive years of dividend increases.

Procter & Gamble
Oral-B (since acquiring Gillette in 2005) and Scope are brands of mouthwash made by Procter & Gamble. P&G is the largest consumer goods company with a net income of USD 11.8 billion in 2011 and has paid uninterrupted dividends on its stock since 1890 and increased payments to shareholders every year for 54 years.

My -23.4% March performance was the worst of my life (and lagged the -12.4% of the S&P 500).However, my Mar dividends were up 44% from last year.My dividend yields are now an insane 6.5% (versus the under 2% mark for the S&P 500).Lots of trades in March (invested 80% of my cash reserves) but I will keep adding if it falls again.Musings Shorter update this month since life is too crazy to look backwards at the moment, plus I made a ton of trades to report (so no gory... Read more

My -4.8% performance beat by the -7.5% of the S&P 500 in February.My Feb dividends disappointed with a 50% monthly drop from last year.However, my dividend yields remain over 5% (versus the under 2% mark for the S&P 500).I stayed away from active trading in February but might do some bargain shopping in March.Musings No one wants to be ‘the guy that lost less’ - since you are still losing. However, I am proud of the way my portfolio has handled 2020’s volatility to... Read more

In January, my wife and I received $442.30 in dividend income. That is an increase of 27.63% compared to last year.We only had two new companies pay us a dividend compared to last year: Occidental Petroleum and Cisco.I added a lot to my Canadian Imperial position throughout 2019. Because of that, the dividend nearly doubled.Man, I can't believe that we are already one and a half months through 2020. Time continues to fly by at an amazing clip. Soon, my daughter will be one and I'll... Read more

SummaryTwo large dividend income checks came in.We received a total of $131.70; 15% from retirement accounts and the other 85% was from the individual taxable portfolio.Dividend income year over year is higher by $35.08 (including my wife's dividend income of $37.85 last year with mine).Currently it's ice raining here in Cleveland. However, for the most part, winter has been warm and even sunny on a few days. One thing though is certain. Dividend income arrives - rain, snow or... Read more