The REIT Elite: Top REITs for the Long Haul

In its August 2012 issue of the “REIT Outlook”, titled The REIT Elite: Comfort Food for Investors, Chilton Capital Management identified a group of 11 REITs that represent the top of the crops in the REIT industry. These companies are “blue chip, core quality holdings” or “sleep at night, confidence-inspiring companies” “investors should buy for (their) grandparents, parents, and children.” The 11 REIT Elite members, on average, have posted superb cumulative total returns over the past decade, outperforming their respective benchmark, the MSCI REIT index, more than threefold over that period. The REIT Elite members, boasting some of the most flexible balance sheets in their industry, have a proven earnings power over long-time periods. In most cases, this assures stability of their distributions and, given the REIT Elite’s distribution payouts below the REIT industry average, provides for distribution growth over time. Therefore, the 11 members designated as the REIT Elite and presented in the table below, represent the top REIT choices for long-term income portfolios. 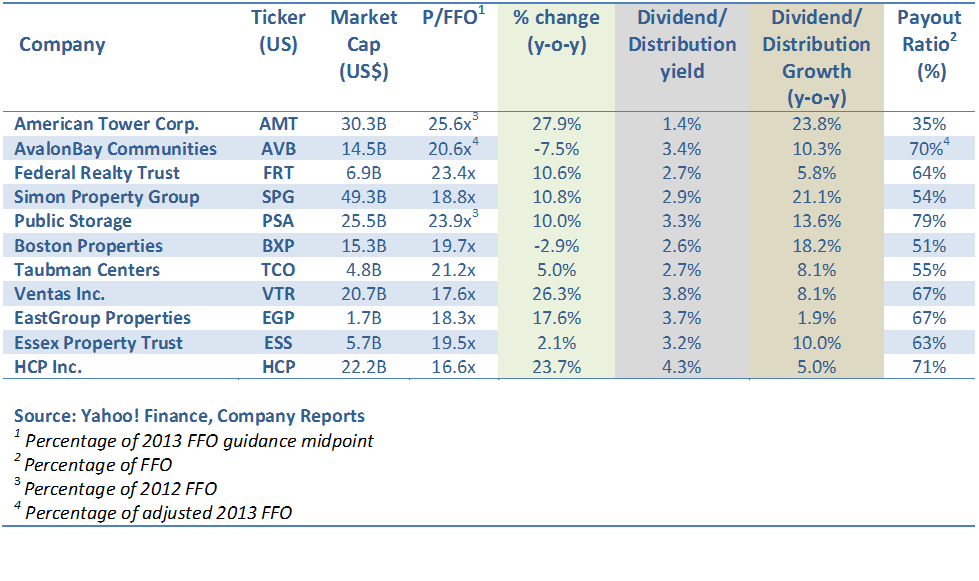 Still, it should be noted that most of these REITs trade at lofty valuations and premiums to their net asset values (NAV). The premium, however, is a reflection of the financial soundness of these companies, their high-quality asset base, seasoned management, consistent profitability, and strong growth in distributions. Still, some of the REIT Elite members have fared better than others over the past 12 months. Going forward, there are a few that look poised for solid performance.

Over the past year, healthcare REITs, such as Ventas (NYSE: VTR) and HCP (NYSE: HCP), have been among top performers. Each of these two REITs realized price returns exceeding 20% over the noted period, driving the 25% index price return of the healthcare REITs in the FTSE NAREIT US Real Estate Index Series. The two healthcare members of the REIT Elite are attractive long-term holdings as they have defensive, non-cyclical fundamentals. With over 28 consecutive years of dividend increases, HCP, the first healthcare REIT to be included in the S&P 500 index and now one of the S&P 500 Dividend Aristocrats, is a clear testament to the sound performance of these REITs through all cycles. In the long-run, healthcare REITs face improving market conditions for growth. Two trends that contribute to this view include the upcoming “graying” of the America –including the number of people above the age of 75 doubling by 2030 (from 2010)– and healthcare spending growing at a 5.8% CAGR through the end of this decade, faster than the average rate of economic growth over that period.

American Tower (NYSE: AMT), a leading provider of wireless and broadcast towers worldwide, fared even better than its healthcare REITs over the past 12 months. Its 27.9% price return over that timeframe tops the REIT Elite list. The REIT “operates long-term tenant leases with contractual rent escalations, has high lease renewal rates, and boasts growth opportunities.” Its major U.S. tenants include the largest U.S. communications companies (AT&T, Sprint, Verizon, etc.) and U.S. government. The REIT’s adjusted FFO for 2013 of between $1.36 billion and $1.41 billion implies a 13.5%-to-17.7% FFO growth for the year. Moreover, the long-term outlook looks rosy, as robustly growing mobile computing/smartphone adoption and deployment of 3G and 4G networks in nations around the globe drive tower demand higher. This tower company has attracted some attention by hedge funds, with billionaire Ken Griffin’s Citadel Investment and Andreas Halvorsen’s Viking Global making bullish bets on the company in the previous quarter. While AMT pays the lowest yield among its REIT Elite peers, it also has the lowest payout ratio, which could signal future distribution hikes amid an extended FFO expansion.

The outlook going forward is also positive for office and industrial space in the United States. The rebounding industrial production and accelerated employment growth suggest improving fundamentals in these two sectors of the REIT industry. EastGroup Properties (NYSE: EGP), focused on the industrial space in the Sunbelt markets with a particular focus on Florida, Texas, Arizona, California and North Carolina, has already seen higher investor demand in response to improving market conditions. However, EGP sees only marginal increase in its 2013 FFO this year (up to 3.9% year-over-year growth). On the other hand, the recovering office market will improve market prospects for Boston Properties (NYSE: BXP), which now has a new CEO at its helm. However, this REIT had been adversely affected by the steep downturn in the office market during the Great Recession, which forced it to slash its dividend back in 2009. Since, the dividend has been improving and, given the company’s relatively low payout ratio, may imply more distribution increases in the years ahead.

Following the underperformance of the multifamily sector relative to other REITs over the past twelve months, the multifamily sector now looks better fit to lead the REIT returns going forward. This view is supported by improving valuations and fundamentals in this pro-cyclical sector, although the multifamily market conditions, most notably the market tightness, have been softening across the nation, according to the National Multi Housing Council. Essex Property Trust (NYSE: ESS), managing a portfolio of quality multifamily units throughout the West Coast, looks particularly well-positioned for growth in these supply-constrained apartment markets. The REIT took a breather last year, following strong performance over the preceding two years. Still, its long-term outlook remains bullish, given that the company’s markets have the highest projected rent growth through 2016. ESS boasts the industry-leading same-store NOI growth in markets characterized by strong job growth and favorable demographic trends in the areas where it is still cheaper to rent than to own housing. ESS features a below-average payout ratio, with solid projected FFO growth, which implies continued distribution growth in the future.

In the retail sector, which is flying high on the wings of improved market conditions, including the trends in the labor market, Simon Property Group (NYSE: SPG), the largest U.S. REIT, owning and operating regional malls and outlet centers, stands ready to continue its outperforming streak. In fact, it has outperformed “relevant indices, including the MSCI U.S. REIT Index and the S&P 500 in 11 of the last 12 years,” according to the company. SPG’s FFO increased 15.8% last year, and is set to expand by up to 6.5% this year. Its occupancy rates have been improving, tenant sales have been on an upturn, and same-store NOI growth has continued to grow. The REIT’s below-industry distribution yield and payout ratio, with good prospects for a continued FFO expansion, bode well for future dividend hikes.

The REIT Elite club consists of the REITs that boast strong upside potential for the long haul. Income-oriented investors are generally attracted to these REITs because of the REITs’ stability and capacity to pay (and in most cases to grow) their cash distributions. With a history of outperformance, the REIT Elite members can be considered good long-term additions to income portfolios.

RNP: A Reliable 7.57% Yield From This Steeply Discounted Fund