Falling Yen and Euro a Boon for These 5 Dividend Stocks

Falling currency values can enhance companies’ international competitiveness and export potential, thereby boosting business sales and EPS. Due to rising exports, the trend is also beneficial to GDP, which in turn further improves the operating environment for these firms. According to Financial Times, it is a general “rule of thumb” that a “10% drop in the Euro’s trade-weighted value will prop up Eurozone’s economic growth by slightly less than 1 percentage point, with the effect starting to be felt after six months.” Over the past few months, there has been a major depreciation in the value of the Japanese Yen and a decline in the value of the Euro relative to the trade-weighted basket of currencies and especially the U.S. dollar. Since October 2012, the value of the Yen relative to the greenback has fallen by 20%, while the value of the Euro has dropped 6.5% from the February 2013 peak. These declines are expected to be part of a new secular trend. 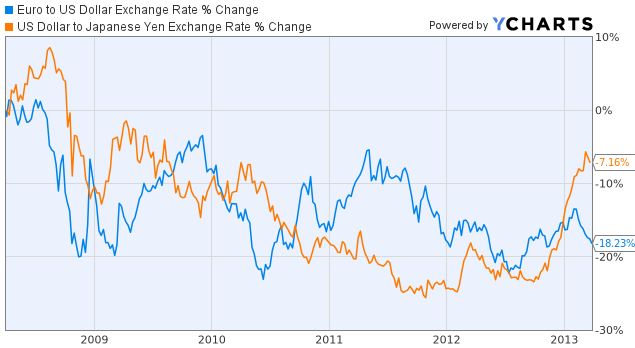 The Yen’s depreciation so far has already been a boon for the Japanese Nikkei, as the expectations of rising corporate profitability have lead to bidding up stock prices. The effect of the Euro’s decline on the Eurozone stocks has been more muted, due to the comparably smaller depreciation in the Euro versus the U.S. dollar, the weaker monetary stimulus expectations, and the onset of financial instability created by the Cyprus banking crisis. Still, continued declines in the Yen and the Euro –which should make Japanese and European products cheaper internationally– will be positive catalysts for the Japanese and European firms’ prospects and stock prices going forward. Japanese and European companies with large sales in North America stand to benefit the most.
As these trends are likely to be sustained over the longer-term period, the expected currency-induced improvement in corporate bottom lines will bode well for dividend growth prospects. With this in mind, here is a quick glance at five Japanese and European companies with large revenue exposures to the U.S. market. These companies pay attractive dividend yields and boast improving total return potential.

One of the most prominent beneficiaries of the falling value of the Yen versus the U.S. dollar is the Japanese auto industry. Among the Japanese automakers, Honda Motor (NYSE: HMC)(TYO: 7267) makes a particularly bullish case in the Yen’s recent fall. The company derives 39% of its sales from the North American market (primarily the U.S.), which means that its improving currency position will not only lower the prices of its products in the U.S. but will also increase the value of sales when converted into the Yen, the denomination currency of its financial statements. The company offers a competitive dividend yield, and the rising profitability bodes well for its dividend outlook. Analysts forecast that the company’s EPS CAGR could reach a robust 28.8% for the next five-year period, which would allow for sound dividend growth. And, as an added impetus to own the stock, HMC is inexpensive on a forward multiple basis, trading at 11.9x, well below the auto industry average multiple of 16.2x.

Other beneficiaries of the falling currencies are the European companies with exposure to the U.S. market. This particularly refers to the French pharmaceuticals giant, Sanofi (NYSE: SNY)(PAR: SAN). The mega-cap pharmaceutical company derives as much as 31% of its revenues from the United States. Its products are not generally price elastic, but the rising U.S. dollar (a declining Euro) will contribute to its financial performance through the currency conversion effect. Sanofi, a committed dividend payer with nine consecutive years of paying dividends, offers an attractive dividend yield and demonstrates good dividend growth record. The outlook for its EPS has improved, with analysts expecting a long-term EPS CAGR to average 6.0%, nearly 8 times faster than over the past five years on average. The EPS growth expectations could be exceeded, given the potential for success of Sanofi’s robust pipeline of 65 new molecular entities and vaccines, including 17 in late-stage trials. The stock is priced at 6.3x forward earnings, little more than half the multiple of its respective industry. It should be noted that legendary investor Warren Buffett has found value in SNY, and is reported as owning 4.06 million shares at the end of last quarter.

The Dutch electronics maker, Koninklijke Philips Electronics (NYSE: PHG)(AEX: PHIA), a $27-billion maker of home appliances, medical equipment and lighting products, is also a play on this currency story. The company is the world’s largest manufacturer of lighting as measured by applicable revenues. Recently, however, Philips said it was planning to exit consumer electronics business. Its 2012 revenues exceeded $32 billion, out of which some 31% came from the United States. The company fared poorly over the past five years, on average, given the challenging environment in Europe. As a result, its five-year EPS CAGR was deep in the red over that period. Now, as the company exits its consumer electronics business and focuses on medical equipment, it expects to see revenue growth of between 4% and 6% this year, with a 10% to 12% EBITDA margin. Analysts forecast a 26% increase in the company’s EPS next year. The stock is inexpensive on a forward P/E basis, trading at 13.6x forward earnings. PGH has rallied 45% over the past 12 months.

SAP (NYSE: SAP)(FRA: SAP), an enterprise software company, also has large U.S. operations, deriving as much as 28% of its revenues from that market alone. The company grew its EPS at an average CAGR of 13% over the past five years, and is expected to see average growth in EPS of 11.2% annually for the next five years. The stock has rallied 15.4% over the past 12 months, and is currently trading at a forward P/E of 16.2x, below its long-term average valuation of 20.6x. Based on its forward multiple, SAP is also more cheaply valued than its peers. SAP pays the lowest dividend yield among the stocks listed here, but it also has the lowest payout, which provides room for dividend growth in the future. HSBC recently upped SAP to outperform, following the enterprise software maker’s acquisition of Camilion, a privately-held software company that helps improve the efficiency of insurance and financial services companies. SAP is forecasting 2013 software and cloud subscriptions revenues to rise by between 14% and 20%. In fact, the company has recently said its “momentum has never been stronger.” This robust performance should now also get a lift from the weaker Euro.

Finally, Siemens (NYSE: SI)(FRA: SIE), the global industrial conglomerate, will benefit from both the recovering global economy and the falling value of the Euro. Its future prospects are primarily tied to the outlook for continued globalization, industrialization, and urbanization, particularly in the large emerging markets of the BRICS nations. Still, the company gets as much as 28% of its total revenues from the United States. Accelerating U.S. economic growth and the effect of the falling Euro versus the U.S. dollar thus bode well for its revenue streams. According to the bullish projections, the company achieved a 31.6% CAGR in its EPS over the past five years, and is forecasted to grow its EPS at a CAGR of 64.8% for the next five years. The company pays an attractive dividend yield with robust dividend growth. In terms of price returns, the stock’s value has increased 6.9% over the past year, so SI is currently trading at 18.5x forward earnings, close to parity with its industry. For the reference, its rival General Electric (NYSE: GE) is trading at a forward P/E of 13.8x.

Share prices of these five dividend payers have seen gains in recent months as weak operating environments have given way to more optimistic outlooks. These companies’ international competitiveness is also improving. These stocks thus represent good growth plays that are priced relatively inexpensively (with a noted exception of Siemens) for the unfolding currency and economic-rebound story.