There are opportunities to earn respectable yield in waste management stocks, however investors need to be highly selective. While the overall industry earned $60 billion in revenues last year, the industry earnings were under pressure due to restructuring and acquisition charges, higher operating costs, and weak recycling prices. However, the outlook has now improved, and remains optimistic for the long-run. For example, TechNavio, a research and advisory arm of the London-based Infiniti Research Ltd., forecasts that the U.S. solid waste management market will expand at an annual growth rate of 3.4% through 2015. The rebounding residential fixed investment, driven by the housing recovery, is currently the key driver of U.S. municipal solid waste volume and pricing growth. Over the longer-term, a growing U.S. population and increasing economic activity, including higher consumer spending, will lead waste production volumes and pricing. All this bodes well for the industry’s future prospects. However, increasing cost will continue to exert pressures on profitability.

In the recent past, despite falling waste volumes, waste management firms were able to implement small 2%-to-3% price increases, according to Waste Business Journal. Analysts now expect volumes to begin increasing as of mid-2013, with higher municipal solid waste volumes enabling the industry players to raise prices at least through 2015, according to Goldman Sachs. The volume growth and better pricing outlook will moderate risks to free cash flow generation, which will improve dividend stability and share repurchase potential of some industry players.

Several prominent investment trusts and hedge funds have recognized the investment potential of some waste management companies. In fact, The Bill and Melinda Gates Foundation Trust holds about 18.6 million shares of Waste Management (NYSE: WM), the largest U.S. waste management company. The Trusts also has about 1.35 million shares of Republic Services (NYSE: RSG). RSG is also popular with value investor Mario Gabelli, who owns approximately 2.1 million RSG shares. With this in mind, below is a closer look at some of the most prominent players in the U.S. waste management industry. While these stocks offer dividend yields at least 100 basis points above the 10-Year U.S. Treasury bond, they also have elevated valuations, which require investors to be selective when considering these stocks.

Progressive Waste Solutions (NYSE: BIN) (TSE: BIN) is likely less attractive than some other waste management stocks, as its PEG is very high at 4.5. Over the past five years, its revenues and adjusted EBITDA grew at a CAGR of 17.3% and 15.2%. However, the rate of growth has slowed significantly, and last year, higher costs lead to a dip in adjusted EBITDA. The current-year guidance projects 4.8% and 6.7% in adjusted EBITDA from 2012. Still, this guidance was weaker than analyst projections, which has prompted analysts to slash their EPS expectations for both 2013 and 2014. Analysts now forecast a five-year EPS CAGR of 5.6%. The company is growing through acquisitions, having invested $308.3 million in 19 "tuck-in" acquisitions last year that will contribute $138 million to 2013 revenues. Despite the projected revenue growth of about 5.5%, free cash flow will remain mostly flat compared to 2012. The company plans to keep its dividend at the current annual rate of C$0.56 for this year. The stock is defensive with a beta of 0.56.

Covanta Holding (NYSE: CVA) has also shown signs of struggling in recent quarters, and remains one of the most expensive waste management stocks on a forward P/E basis, boasting a forward multiple of 34x. This company is “one of the world’s largest owners and operators of infrastructure for the conversion of waste to energy.” The company recently posted first-quarter adjusted loss of 21 cents per share, compared to a loss of 9 cents per share in the year-ago quarter. Interest expense and depreciation costs will lead to a 13.5% decline in adjusted EPS this year (based on the EPS guidance midpoint), despite adjusted EBITDA growth of about 5%. However, its free cash flow is expected to rise about 1% in 2013. Stable free cash flows have enabled the company to double its dividend in 2012 and to raise it by another 10% this year, despite struggles with profitability. Its dividend payout is only 30% of free cash flow, which means there is more room for dividend growth in the future. The company also has $126 million in share repurchase authorization as of March 31, 2013.

Although pricey, the largest of waste management companies, Waste Management (NYSE: WM), is also likely the most appealing. The stock has risen modestly by 7.6% over the past year, and boasts a forward P/E of 17.6x, below its industry’s forward multiple of 20.1x. The stock also offers the highest yield among its peers featured here. Given its high yield and low, defensive beta of 0.58, the stock allows for premium valuation, although WM’s valuation is still high for its utility-like business. The company expects to see volume growth of between 0.5% and 1.0% and pricing to lift revenue by 1.0%-to-1.5% this year, which is clearly anemic. EPS growth should average between 3% and 6%, while the largest portion of that growth will come from cost cutting and share buybacks (the company authorized $500 million in buybacks for 2013). However, the company’s free cash flow will grow by between 33% and 45% on capital spending returning to normal, lower levels, cost synergies from acquisitions, and revenue growth. The improved cash flow brings the dividend payout ratio to about 60% of free cash flow, which provides some room for moderate dividend growth in the future. The company’s CEO recently responded to proposals to convert WM into a REIT so as to boost shareholder value through higher dividends.


Also appealing is a small-cap waste management stock, US Ecology (Nasdaq: ECOL). This company “provides radioactive, hazardous, PCB and non-hazardous industrial waste management and recycling services to commercial and government entities, such as refineries and chemical production facilities, manufacturers, electric utilities, steel mills, medical and academic institutions and waste brokers.” The stock has rallied nearly 24%, but still trades at a forward multiple of 16.8x. The company has delivered positive EPS surprises over the past 10 consecutive quarters. It delivered record operating income, record net income and record adjusted EBITDA last year. Following an increase of 31% in adjusted EPS in 2012, the company projects an increase in adjusted EPS of between 9.0% and 11.5% this year, excluding any foreign currency gains or losses. Its annualized dividend growth was 8.5% over the past five years, while its payout ratio and low debt-to-equity suggest that improving profitability could lead to dividend increases in the future.

Finally, Republic Services (NYSE: RSG) like other waste management companies has strong and predictable cash flows. In fact, about 80% of its revenues are annuity-like, which provides some security that is needed for stable dividend payouts. The company struggled last year, reporting a drop in adjusted EPS. However, it is expected to deliver modest revenue growth of about 2.0%-to-2.5% this year, mainly based on price increases and absent any volume growth. As a result, its adjusted EPS is forecasted to a range of $1.86-$1.91, which implies growth of about 4.8% based on the guidance midpoint. However, free cash flow will continue to deteriorate, but the dividend payout as a share of free cash flow will remain below 50% even with lower free cash flow. The stock is trading at 17x forward earnings, with a PEG of 1.6.

In summary, investors can find attractive yield in the waste management industry, but valuations in the sector are high, requiring high rates of growth that are still absent in this industry. The valuation premium in some cases may be attached to a defensive nature of the industry and relatively high yields of some industry players. Looking specifically at the featured stocks, Waste Management and US Ecology stand out as stocks with solid return potential. Covanta Holding Corporation looks poised for continued robust dividend increases in the future; however, it is excessively valued. Progressive Solutions has an unfavorable PEG, while Republic Services likely needs to show faster growth and higher yield to become more appealing to dividend investors. 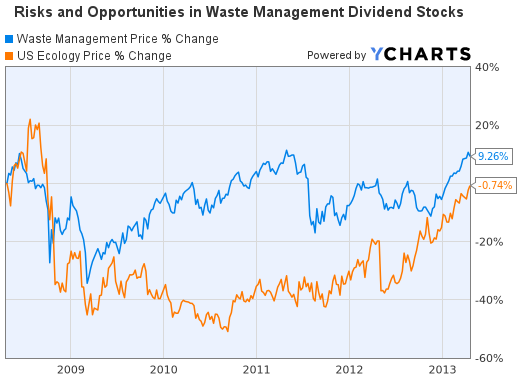 This article was severely delayed because my fiance got me hooked on Game of Thrones (GOT) and I have made a concerted effort to watch all of the currently available seasons before the release of the 8th and final season. While this has taken away from my normal free time (and I mean literally all my free time), it has provided me with some interesting thoughts about the stock market. For those who have not seen GOT but plan to watch it at some point please understand that the remaining segment... Read more

Which Of These 15%-Plus Yielders Should I Buy: SMHD Or SMHB?

Investment Thesis The story of David Vs. Goliath is one of the most well-known parables to come from the Bible and the lessons from it transcend language and culture barriers across the world. In the end, it was David's agility and precision that helped him overcome Goliath. It would be difficult to fault an investor for feeling like they are up against Goliath at the moment, after all, there are a number of macroeconomic events that are all converging at once that have contributed to... Read more

Investment Thesis October marks the eighth month that I have been tracking John's retirement accounts in an article. Since the beginning of January 2018, his portfolio has produced $11,048.30/Dividend Income through September 30, 2018. For those new to this series, John is a recently retired investor whose retirement is entirely self-funded in the form of Taxable, Roth, and Traditional IRA Savings (for the record, he does receive social security). The allocation of this portfolio is... Read more