Stocks of consumer staples companies are generally recognized as defensive plays with low volatility and low correlation of returns relative to those of the overall market. Representing the companies with primary operations in food, beverages, tobacco and other household items, the consumer staples stocks are attractive due to the non-cyclical nature of their underlying business, which exhibits a tendency to do well in both good and bad times. Historically, the sector has offered slow and steady growth, and has paid respectable dividends. However, now, growth opportunities in international markets have invigorated the earnings growth of many consumer staples companies, with particularly robust growth by companies with significant or rising exposures to emerging markets. In fact, the potential of consumer staples companies with emerging markets exposure is vast, given the expected increase in emerging markets’ per capita incomes that will swell the size of the global middle-class “from 1.8 billion in 2009 to about 3.2 billion by 2020 and 4.9 billion by 2030”, according to OECD.

Dividend investors pursuing consumer staples stocks with attractive yields and total return potential should look into those stocks that have exemplified a consistency in paying or raising their dividends in response to earnings growth over time. Particularly interesting are stocks of consumer staples companies that comprise the Nasdaq International Dividend Achievers Index. The index constituents include an international group of American Depository Receipts (ADRs), Global Depositary Receipts, and non-U.S. common stocks of companies that have increased their annual dividend for five or more consecutive fiscal years. The list below summarizes key characteristics of five consumer staples stocks with prospects for continued expansion in the future that promises to boost earnings, dividends, and total returns. 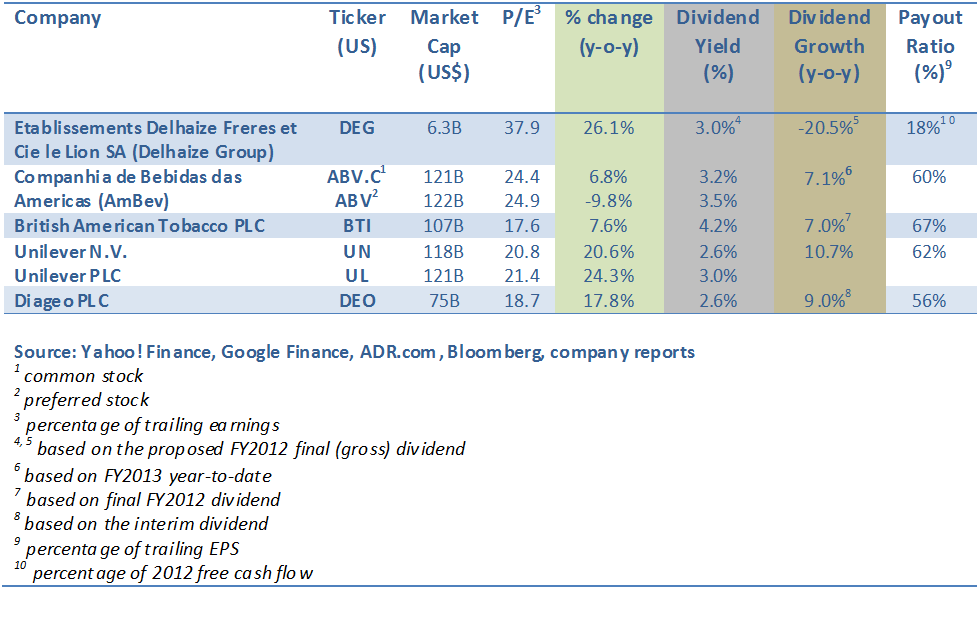 Delhaize Group (NYSE: DEG)(BRU: DELB) is a Belgium-based international grocer with total annual sales of close to $30 billion. The company is active in ten countries, but the lion’s share of its revenue comes from the U.S. and Belgium – with U.S. operations accounting for two-thirds of total sales. Last year, the company reported a 7.7% increase in global revenues, while its underlying operating profit dropped 13.4% from the year earlier. The decline in profitability, in general, was driven by costs associated with store closures and competitive pricing pressures. Emerging market sales (in Southeastern Europe and Asia) were up 30% last year, mainly on the acquisition of Serbian Maxi store chain. This year has brought a sigh of relief, as the recently announced preliminary financial results show strengthening trends, in particular in the United States. The company’s overall revenues continued to grow in the first quarter, while its operating profit rose for the first time in six quarters. While Delhaize Group still expects to earn lower underlying operating profit this year (down 4.3%), it is projecting free cash flow of about $650 million annually between 2013 and 2015. Given the company’s low payout ratio, once the operating results stabilize and capital spending moderates, ample free cash flow generation capacity should enable the company to resume dividend growth.

Companhia de Bebidas das Americas (AmBev) (NYSE: ABV)(NYSE: ABV.C)(BOVESPA: AMBV4)(BOVESPA: AMBV3) is the Latin American beverages giant and the region’s largest brewer. The company has strong growth prospects on the expected increase in per capita incomes in Brazil and other Latin American countries. In fact, according to Euromonitor, the propensity of people in Latin America to spend on soft drinks –at about 4% of disposable income in 2011– is higher than in any other region of the world. This tendency suggests that higher per capita incomes should translate into higher sales of beverages, including beer. Revenues are already growing robustly. The company’s organic revenues increased 13.7% year-over-year in the fourth quarter and 12.4% in 2012 as a whole. Normalized EPS also jumped from the year earlier, in both fourth quarter and the year, despite large increases in costs. The company sees net revenue per hectoliter growing in the high single digits in percentage terms, primarily on price increases last year. It also plans to boost beer output capacity in Brazil to meet anticipated high demand for Budweiser beer during the soccer World Cup next year.

British American Tobacco (NYSE: BTI)(LSE: BATS) is the world’s second-biggest cigarette maker with the broadest geographical exposure, marketing cigarettes in 180 markets globally. Its main brands include Pall Mall, Dunhill, Kent, and Lucky Strike. The company derives some 70% of profits from emerging markets, which has helped it navigate well declines in cigarette sales in North America and Western Europe. Despite high regulatory risks and possible litigation charges that could dent profitability, cigarettes makers such as British American Tobacco PLC have strong premium branding power and strong pricing capacity. While the company saw a total number of cigarettes sold fall in the first quarter by 3.7% from the year earlier, to 160 billion sticks, its capacity to increase prices (by 8.7%), helped boost sales. Last year, British American Tobacco PLC’s adjusted operating profit increased 3% to £5.68 billion ($8.7 billion at the current exchange rate) on a 1% drop in total revenues. The company has indicated it will make a push into new products such as nicotine inhalers and “e-cigarettes” in the near future, eying “billions” in sales of new products.

Unilever (NYSE: UN)(NYSE: UL)(LSE: ULVR) is an Anglo-Dutch consumer goods giant that was established some 83 years ago when the Dutch group Margarine Unie merged with UK’s Lever Brothers. The firm has universally recognized brands, offering a diversified product mix across a broad range of geographical markets, with no single country assuming more than an 8% share in the company’s total sales. The company estimates some 2 billion customers use its products in 190 nations of the world. This positions Unilever well for future growth, especially in emerging markets, which account for 55% of the company’s total sales. Unilever recently reported growth in the first-quarter underlying sales of 4.9% overall, with emerging market sales were up 10.4% year-over-year. Diverging from these trends, sales in North America were mostly flat and lower in Europe. The company saw both volume and pricing growth last year and during the first quarter. Looking at the long term, Unilever’s outlook is positive, as some 1 billion new people reach capacity to buy Unilever products by 2020, according to the company’s estimates. Unilever pays an attractive dividend yield and has increased its payout, on average, by 8% annually since 1979. The recently-announced dividend hike of 10.6% exceeds that long-term average. Analysts forecast the company’s long-term EPS CAGR at 8%.

Diageo (NYSE: DEO)(LSE: DGE) is a UK-based global beverages giant, marketing premium drinks brands such as Johnnie Walker, Baileys, Guinness, and Smirnoff. The company reported a 5% growth in organic net sales for the nine months ending March 2013, including a 4% gain in organic net sales in the first three months of 2013. Emerging markets saw especially robust activity, with Latin American and Caribbean sales up 14% and Turkey sales higher by 9%. Emerging market sales will be further boosted by the company’s expansion into the Indian market by acquiring a 53% stake in India’s largest alcoholic beverages company United Spirits Ltd. Diageo is in the process of restructuring and is aiming to boost productivity and reduce costs, which should bode well for its bottom line. Analysts forecast an EPS CAGR for Diageo PLC at 9%, on average, for the next five years. Analysts also expect the spirits company to hike its dividend payout by about 8% this year.

In conclusion, international consumer staples sector offers opportunities for dividend investors. While the sector’s defensive nature is good for portfolio diversification, its exposure to emerging market growth promises total return potential, including sustained dividend growth in the future. Investors should still be selective in the sector, given that valuations have risen, pricing in the expectations of higher future growth.