U.S. Jobs Recovery A Good Sign for These Dividend Payers

The U.S. jobs market has been on a bumpy and slow path to recovery. However, the latest U.S. payrolls data for April 2013, released by the Bureau of Labor Statistics, contained some good news. Payroll jobs increased above economists’ estimates, although the pace of job gains remains tepid at best. The upward revision of the employment gains in February and March –from 236,000 to 332,000 new jobs created in February and from a measly 88,000 to 138,000 jobs created in March– painted a picture of a stronger employment recovery in early 2013 than previously thought. What’s more, the unemployment rate continued its slow but steady decline, falling by 0.1 percentage points to 7.5%, its lowest since late 2008. The outlook is likely to continue to improve in the spring and summer months, as the overall percentage of employers who anticipate staff reductions in the Q2 drops to the lowest since Q3 2000, according to the Q2 2013 Manpower Employment Outlook Survey. SimplyHired’s U.S. Employment Outlook from May 2013 sees the positive momentum continuing, as “job listings increase in nearly all industries”.

The more sanguine outlook for employment growth has been a boon for a number of stocks associated with the U.S. labor market. Payrolls processing, human resource outsourcing, and staffing services companies have reported improving trends, which are expected to advance further as the rebound picks up pace. However, much of the anticipated employment growth has already been priced into valuations of these stocks, making them generally expensive at current price levels. Among the main beneficiaries of the improving trends in the labor markets –both in the United States and globally– are several dividend-paying stocks. The table below provides a quick overview of the main dividend and performance characteristics of these dividend payers.

In the payroll processing sector, Automatic Data Processing (NYSE: ADP) is a consistent dividend grower that belongs to the S&P 500 Dividend Aristocrats, given its record of some 38 years of consecutive annual dividend increases. The company is also one of the very few stocks that have raised dividends at more than 10% annually, on average, over at least the past 10 years. ADP, which holds negligible amounts of long-term debt on its balance sheet, is also one of a few non-financial corporations with AAA ratings, currently higher than the credit rating of the U.S. government.

Paychex (Nasdaq: PAYX) is another payroll processor, which focuses on small-and-medium enterprises (SME). It serves 567,000 payroll clients in the United States and a small number in Germany. The company is very profitable, as its margins are much higher than those of ADP, and is more efficient than competitors, which is evident from the fact that the much larger ADP processes nearly five times more W-2s than Paychex but earns only 2.6 times the net income of its smaller peer.

In the payrolls processing sector, Insperity (NYSE: NSP) is yet another, small-cap provider of payroll and human resource outsourcing that focuses on the SME sector. The stock pays a dividend yield lower than that of its peers, but it boasts potential for long-term dividend growth, in case its EPS growth accelerates with a rebound in employment and expected long-term increases in interest rates. The company does not have any long-term debt on its balance sheet and is trading at a price-to-sales ratio of only 0.3. Back in February, Insperity provided 2013 EPS guidance well below analysts’ expectations, mainly due to lower interest income and investment in health-care reform strategy. However, with a recently released quarterly earnings report, the company raised its annual EPS guidance from the earlier $1.47-to-$1.56 range to $1.51-to-$1.61 range (above the analysts’ consensus of $1.51 per share).

Among these three companies, NSP has the highest expected long-term EPS CAGR. At 18.3% for the next five years, its EPS CAGR is double the forecasted CAGRs of both ADP and PAYX. Still, both ADP and PAYX represent safer bets, given their strong recurring revenues, solid balance sheet, robust cash flows, and higher yields. Between ADP and PAYX, the latter stock has lower prospects for dividend growth, but priced on par with its bigger rival, PAYX could offer higher income due to its more competitive yield. PAYX also produces much higher return on equity at 32.8% on a trailing-twelve-months basis versus ADP’s 21.7%.

Among the HR outsourcing/staffing services companies, the largest two are Robert Half International (NYSE: RHI) and ManpowerGroup (NYSE: MAN). The former staffer has proven resilient in down cycles, implementing consistent dividend increases even during the periods of surging unemployment. In fact, the company has now raised dividends every year since 2005, and is boasting a low payout ratio, which, with a forecast EPS CAGR of 15.8% for the next five years, promises continued dividend hikes in the future that can support compounded income returns over time. RHI’s previous quarter was somewhat disappointing, with its U.S. revenue growth decelerating to 6.3% year-over-year, and international revenues dropping 8.8% over the year earlier. The main weakness for this staffer remains its international operations which account for 25% of its total sales.


Even more globalized is ManpowerGroup, a U.S.-based staffing firm that derives about 65% of its revenue from Europe. The U.S. accounts for 15% of its revenue share, which is a reason this staffing company is not a good play on a rebound in the U.S. labor market. While the company offers exposure to the European employment growth, the deepening recession in Europe this year will continue to exert pressure on ManpowerGroup Inc. financial performance in the near term. Its dividend yield is relatively low, but its dividend may grow in the future if the forecast 11.8% long-term EPS CAGR materializes.

Kelly Services (Nasdaq: KELYA), a small-cap provider of staffing services saw its revenues decline by 1.8% last year. Adjusted diluted EPS from continuing operations was deep in the red in 2012, falling by nearly 26%. The company offers a relatively low yield, but its payout ratio is very low, suggesting a possibility of a higher payout in the future, if its profitability improves with the accelerating job growth. However, the company’s dividend was discontinued in 2009 and reinstated at the current 5-cent payout in August 2011, which suggests its susceptibility to earnings volatility. KELYA is trading at 80% of its book value and 11x forward earnings; however, despite its apparently lower valuation compared to that of its peers, KELYA is riskier and less attractive for income than some of the other featured stocks.

The most unloved by the market among the seven discussed dividend-paying stocks is CDI (NYSE: CDI). This company provides engineering and IT solutions and staffing services to clients in several industries, including energy and chemicals, aerospace and industrial equipment, and Hi-Tech. The company has seen weak revenues and declining margins in its latest quarter, reporting “a shift to lower margin business within its Professional Services Staffing (segment), as well as continued weakness in higher-margin Management Recruiters International (MRI) permanent placement and contract business.” While its dividend is the highest among this bunch, it mainly reflects the price decline to near 52-week low and heightened risk, given that its payout has been maintained at 13 cents since November 2007. CDI is trading on book value and 13.1x forward earnings.

In conclusion, the safest bets among the dividend payers with exposure to the U.S. labor market are payroll processing and benefits outsourcing companies. With the decades-long streak of dividend increases, ADP offers safe dividends with a potential for capital appreciation. An even better bet may be PAYX, which pays a comparatively high yield, although its room for marked dividend growth is limited. However, these stocks are trading at elevated valuations that mostly reflect upbeat expectations of future growth. NSP could also be a fair, less expensive play on the sector’s future growth. On the other hand, staffing companies are expected to benefit from the continued growth in the U.S. employment; however, they look like less attractive income bets for prudent dividend investors. They are exposed to economic cyclicality and their dividends are as safe as those of companies in more defensive sectors. An exception here is RHI, which should be further researched. 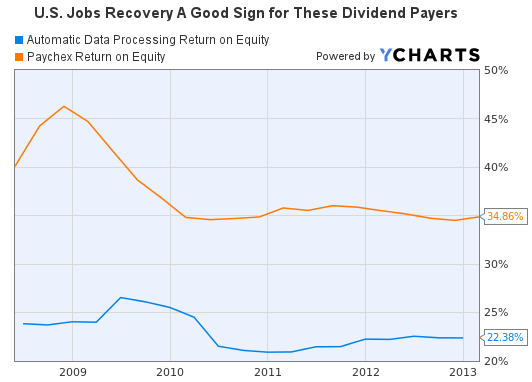 Paychex, Inc. (Nasdaq: PAYX), a leading provider of integrated human capital management software solutions for human resources, payroll, benefits, and insurance services, today announced that its board of directors approved a $.13 increase in the company’s regular quarterly dividend, an increase of 20 percent. The dividend will increase from $.66 per share to $.79 per share and is payable May 26, 2022 to shareholders of record May 12, 2022.... Read more

Paychex, Inc. (Nasdaq: PAYX), the HR software and services company that provides the power of simplicity for increasingly complex workplaces, today announced a quarterly dividend of $.66 per share payable August 26, 2021. The dividend is available to shareholders of record as of August 2, 2021.... Read more

Paychex, Inc. (Nasdaq: PAYX), the HR software and services company that provides the power of simplicity for increasingly complex workplaces, today announced that its board of directors approved a $.04 increase in the company’s regular quarterly dividend, an increase of 6%. The dividend will increase from $.62 per share to $.66 per share and is payable May 27, 2021 to shareholders of record May 12, 2021.... Read more

Time to Check out Paychex Stock In a world of soaring tickers, Paychex, Inc. (NASDAQ: PAYX) doesn’t get much investor attention. The company’s shares plunged in the market sell-off in March 2020, bounced back later, and are now trading around the same level as they were just before the COVID-19 outbreak. However, PAYX stock could be an opportunity, as it’s one of the more solid dividend payers in today’s market. Better yet, as the economy continues to recover from the... Read more

Today the Board of Directors of Paychex, Inc. (NASDAQ: PAYX) declared a regular quarterly dividend of $.62 per share payable February 25, 2021 to shareholders of record February 1, 2021.... Read more