Regional banking stocks have been long known as payers of dependable dividends. Their resilience even during the most severe financial distresses, such as the 2008-2009 financial crisis, testifies to their ability to pay and even grow dividends through all economic cycles. As the economic growth is expected to accelerate in the second half of this year, the outlook for regional banks is improving. A higher demand for consumer and commercial and industrial (C&I) loans, improving loan quality, and prospects for higher net interest margins bode well for these banks. For some, the improvement will be a progression from last year’s strong operational performance.

SNL Financial, a business intelligence service provider with a particular focus on the financial industry, has developed a ranking system for the best-performing regional banks, those with less than $50 billion in assets and operating a branch network of more than 60 offices. It has ranked 25 best-performing regional banks with strong capital adequacy based on six core financial performance metrics that focus on profitability, asset quality, and growth over the twelve-month period ended December 31, 2012. The metrics include return on average tangible common equity [ROATCE], net charge-offs as a percentage of average loans, adjusted Texas ratio, efficiency ratio, net interest margin, and loan growth. Among the top performers are a few regional banks paying attractive dividend yields and showing positive loan growth. The table below summarizes performance, valuation, and dividend characteristics of the four selected high-yielding, financially-sound regional banks from among the best-in-class regional banking peers.

With the exception of BankUnited (NYSE: BKU), which initiated its dividend in 2011, all other dividend-paying regional banking stocks listed above have been able to sustain or grow their dividend payouts during the last financial turmoil. They are all trading at premiums to their book values, but, in most cases, that valuation leaves room for additional appreciation. In the yield-starved environment, the yields of these banking stocks that are at least 130 basis points above the current yield on the 10-Year U.S. Treasury bond represent good income potential. With this in mind, here is a closer look at the specifics of each of the four featured stocks:

BankUnited reported total assets of $11.7 billion at the end of 2012. Its ROATCE was 17.19%, on par with the average for the 25 best-ranked regional banks. The bank’s net charge-offs as a percentage of average loans was 0.18%, while its efficiency ratio, measuring its ability to turn resources into revenue, was at 45.61%, below the average for its peers. The bank reported an adjusted Texas ratio, a measure of credit troubles that divides non-performing and troubled loans with tangible equity and loan loss reserves, was low at 4%. BankUnited’s net interest margin of 6.35% was the highest among its top-ranked peers. The company reported strong loan growth of 28.08% in 2012 as a whole. The bank’s strong performance is evident in its consistent dividend increases since 2011, as its current dividend is 50% higher than that initiated in the first quarter of 2011. Valued at a 40% premium to its book value, the bank is priced close to its average valuation over the past two years.

Cullen/Frost Bankers (NYSE: CFR) is also one of the best operational performers from the previous year. As of December 31, 2012, the bank held some $23.2 billion in assets and achieved a total ROATCE of 13.23%, somewhat below the average for its top-ranked peers. Its net charge-offs as a percentage of average loans was at 0.19%, among the lowest in its industry, while its adjusted Texas ratio of 5.51% was also among the lowest. The bank reported an efficiency ratio of 59.79%, above the first-ranked BankUnited. Cullen/Frost Bankers’ net interest margin of 3.59% was lower than that of its peers on average. As this bank is operating in local markets with robust economic growth, its loan growth averaged 15.36% last year. In the first quarter, average loans grew 13.2% from the year earlier. The bank has low funding costs and little long-term debt. In fact, it was one of the first U.S. banks to reject TARP bailout money. The bank is an avid dividend payer, boasting a record of 18 years of consecutive annual dividend increases.


Community Bank System (NYSE: CBU) is another high-yield, high-performance regional bank. It reported total assets of $7.5 billion at the end of 2012. At that time, the bank’s ROATCE was 16.2%. Its net charge-offs as a percentage of average loans stood at a low 0.28%, while its adjusted Texas ratio was equally positive at a low 6.49%. The bank reported an efficiency ratio of 62.11%. Its net interest margin of 3.62% was lower than that of most of its top-ranked peers. The bank realized loan growth of 11.35% last year. In the first quarter, its average loans grew 11.8% from the prior-year quarter. Between 2006 and 2012, the bank’s diluted EPS grew at a CAGR of 7.5%, while dividends increased at a CAGR of 5.2%. Last quarter, CBU attained record-high net income and diluted EPS for a first quarter. Total first-quarter revenue growth of 9.2% year-over-year was driven by an 11.6% increase in average earning assets, partially offset by a continued contraction in net interest margins. The bank’s continued expansion bodes well for its future dividend growth. CBU represents an excellent example of an avid dividend payer, boasting 20 consecutive years of dividend growth, which earned it a Dividend Aristocrat status last year.

City Holding (Nasdaq: CHCO) also represents a solid performer among regional banks and an attractive banking sector play for income investors focusing on total returns. The bank saw the highest price return over the past year among the four featured dividend stocks. However, the stock also carries the richest price-to-book ratio among the four banks. This holding company for City National Bank of West Virginia reported total assets of $2.92 billion at the yearend 2012. Its ROATCE has been higher than competitors’ for years. At the end of December 2012, it stood at 15.09%. The bank also reported net charge-offs as a percentage of average loans at a low 0.34% and an adjusted Texas ratio of 17.5%, which is elevated compared to the same metrics of its peers. City Holding Co.’s reported an efficiency ratio of 56.57% at the end of last year. Its net interest margin stood at 4%, while its loan growth of 8.75% last year was comparably lower than that of its peers. However, the bank has been buttressing its EPS expansion through share repurchases and acquisitions. Last year, it added to its portfolio the assets of Community Bank and Virginia Savings Bancorp, Inc. These acquisitions have boosted City Holding Co.’s net interest margins and, thus, its net interest income.

As shown above, there are plenty of solid dividend plays among the top-tier regional banks. The four featured banks have shown resilience during the most challenging times and have been able to avert cyclicality in their dividends, showing commitment to boosting shareholder value through both good and bad times. Cullen/Frost Bankers and Community Bank System are good examples of long-lasting commitments to shareholders, as evidenced by their dividend growth streaks stretching over a large number of years. With solid yields and fair valuation, the four high-yielding regional banks represent good income plays for at least the medium term. 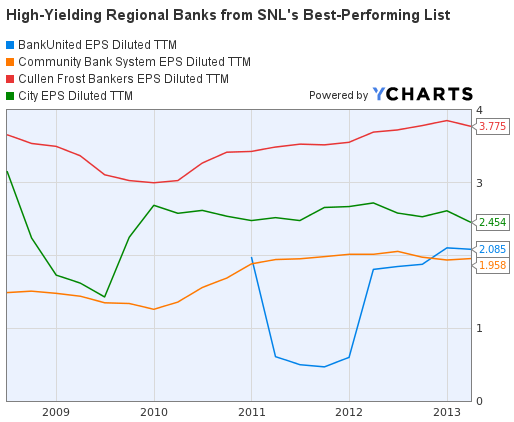 Dividend Champion Banks: The Best Of The Best In Credit Quality