Companies in the chemical industry are highly susceptible to business cyclicality. This means that during expansions, they tend to be highly profitable at the peak of the cycle, while during contractions, their margins fall and profitability sags. While the overall economy has been in an expansionary phase for several years now, the pace of growth has been tepid at best. Both specialty and diversified chemicals makers have benefited from that growth, but the potential for more robust sales and earnings growth appears to be still ahead. According to American Chemistry Council, the global demand for specialty chemicals is expected to grow at above-average rates of 3.1% this year –double the rate in 2012– and 4.2% in 2014. The main growth drivers will be recovering automotive and electronics sectors. As the U.S. and global economic growth rates accelerate as of the second half of this year, the outlook for chemical companies will become more optimistic.

There is a number of stocks in the chemical industry; however, only a selected few balance their growth with shareholder returns in the form of dividends. The table below summarizes the profile and dividend characteristics of four specialty chemicals stocks paying attractive yields above the average yield of the 10-Year U.S. Treasury bond.

Among the aforementioned stocks, LyondellBasell Industries (NYSE: LYB) has the largest market cap, the highest total return over the past 12 months, and the lowest dividend payout ratio. It is also one of the most attractively priced plays in the specialty chemicals industry, with trailing and forward earnings multiples of 12.4x and 9.4x, respectively. Despite such a robust appreciation of its stock value, LYB is still trading at a price-to-book ratio below the average for its industry as a whole. In addition to appealing valuation, LYB boasts a huge growth potential, including swelling cash flow that can be channeled into higher regular dividends, special dividends, and share buybacks. The company estimates that, at 2012 conditions, its growth and improvement programs will likely generate by 2016 an additional $1.5 billion-to-$2.0 billion annually in pre-tax earnings. Its annual discretionary cash potential is $2.0 billion-to-$3.5 billion, in addition to interim dividends, which could lead to significant shareholder returns in the form of special dividends and share repurchases. Some analysts expect that the company’s shareholders will approve a share buyback program at the next Annual General Meeting of Shareholders to be held on May 22. LyondellBasell Industries produces polyolefin (polypropylene and polyethylene) materials for a large number of industrial applications.

Olin (NYSE: OLN) is a diversified company operating in three segments: chlor alkali products, chemical distribution, and Winchester. The company makes and distributes chlorine, caustic soda, hydrochloric acid, hydrogen, bleach products, and potassium hydroxide. Winchester is a segment of its operations that focuses on sporting ammunition, small-caliber military ammunition and components. The company boasts a record of some 346 consecutive quarterly dividend payouts. Through a combination of organic growth and acquisitions, Olin achieved a 9.7% CAGR in EBITDA since 2006. Its FY2012 EBITDA was the highest in the company’s 100+ year history. Driven by strategic initiatives, including bleach and hydrochloric acid growth initiatives (i.e. expanded capacity), accretive acquisition of KA Steel, cost savings and robust non-chemical (Winchester) operations, the company projects a 5% increase in its adjusted EBITDA in FY2013. In terms of valuation, OLN looks undervalued, trading at trailing and forward P/Es of 13.4x and 11.2x, respectively.

RPM International (NYSE: RPM) is expensive on a trailing P/E basis, but its forward P/E of 16.5x paints a picture of rebounding profitability that leads to a more affordable valuation. The company has produced a 10.6% CAGR in both sales and net income over the past 25 years, on average. The company also boasts 39 consecutive years of dividend increases, with a five-year historical dividend CAGR of 3.6%. RPM International looks poised for a continued strong performance this year and beyond, as it sees FY2013 sales up by between 8% and 10% and diluted EPS up by between 9% and 12%. The company’s long-term sales CAGR is 10%, with core growth of 5% and emerging market sales growing at a CAGR of between 15% and 20% annually. The maker of industrial coatings and sealants for waterproofing and general maintenance, corrosion control, and other specialty chemicals, RPM International is currently making news because of a U.S. bankruptcy court opinion that Bondex International, RPM International’s bankrupt unit, may owe current and future asbestos victims some $1.17 billion. As the appeal is expected, the process may stretch for another two to three years.


Cabot (NYSE: CBT) is a small-cap specialty chemicals player manufacturing rubber products and specialty carbons, inkjet colorants, activated carbon, aerogel, and other products. The company’s performance was relatively soft in its fiscal second quarter ended March 31, but Cabot reported “signs of improvement with higher sequential volumes”. Despite the macroeconomic headwinds, in early May the company reported that it was halfway through its three-year plan to achieve adjusted EPS target of $5.00 in FY2014. In fact, based on the target, the company’s EPS would need to increase 50.6% from FY2012 to meet the $5.00 target in FY2014. Analysts are generally bullish about CBT, forecasting a jump in its EPS of 29.6% next year. Their long-term forecast is somewhat more modest than that for the next year, with the company’s EPS projected to grow at a long-term CAGR of 10%. In terms of valuation, Cabot Corporation is valued attractively at a price-to-book of 1.4, well below the industry’s ratio of 3.7. Its forward P/E is only 10.2x.

In conclusion, shares of LyondellBasell Industries offer growth at a low price option, with a potential for significant dividend growth and capital deployment through special dividends and share buybacks. RPM International, although not inexpensive, is an attractive dividend play with a decades-long consistency in dividend increases. Both Olin and Cabot look like potential value plays, but the former company is somewhat less of a pure play on specialty chemicals as it is generating a portion of its revenues and earnings from non-chemical operations. The three stocks except for Cabot look like potential momentum plays, given their strong total returns over the past year. 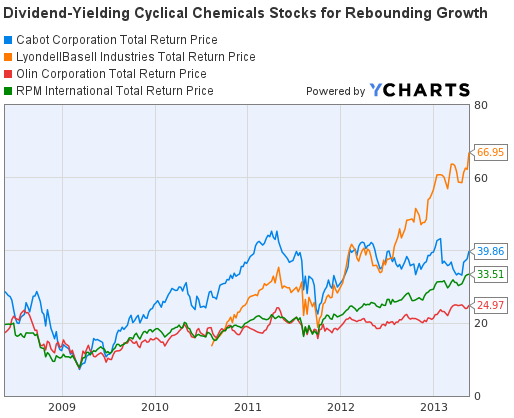