Defensive REITs for Income Investors to Mitigate the Downside Risk

The market is climbing to new highs, and some market observers are voicing concerns about a possibility of a short-term correction and consolidation. This makes appealing a group of equities boasting defensive characteristics such as low-volatility of returns. Low volatility means that an equity’s returns over time do not deviate widely from their average return over that time, but, instead, change at a steady pace. Empirical evidence shows that low-volatility equities tend to produce higher risk-adjusted returns over a long-term horizon than high-volatility equities and the broad market benchmarks. In part, this outperformance is due to lower drawdowns during market downturns. In fact, according to Standard & Poor’s, back-testing has shown that the S&P 500 Low Volatility Index, the index comprised of the least volatile stocks in the S&P 500, had a maximum drawdown of 36% over the past two decades compared to 51% for the parent S&P 500 index.

Defensive low-volatility Real Estate Investment Trusts (REITs) could represent good ways for income investors to mitigate the downside risk. REITs are known for paying attractive yields, as they distribute 90% of their taxable income as cash distributions (dividends) to investors. These investment vehicles have outperformed the broader market in each of the past four years, and their outlook is still positive, given the Fed’s commitment to keeping interest rates low for an extended period of time. Among the REITs, there is a small group of those that can be characterized as low-volatility REITs. Low-volatility REITs provide the opportunity to investors to participate in the upside while reducing the downside capture risk. Thus, prudent income investors should look into these REITs as defensive income plays during the periods of heightened volatility or market corrections.

The table below summarizes the main characteristics and dividend profiles of five low-volatility REITs. These REITs generally pay competitive yields, but in most cases have relatively elevated valuations. Therefore, investors should closely scrutinize these REITs when evaluating suitable low-volatility investments.

Among the aforementioned REITs, National Retail Properties (NYSE: NNN) has achieved the highest total return over the past 12 months. Its valuation is somewhat elevated, but the REIT still pays an attractive dividend yield and looks primed for future dividend growth. In fact, NNN has outperformed REIT indices and broad equity benchmarks over most historical periods, as it has provided consistent growth in cash distribution over the past 23 consecutive years. This single-tenant, net-lease retail REIT owns 1,636 properties located in 47 U.S. states that are leased to some 300 tenants in diverse industries. It has consistently maintained high occupancy, and its current properties boast a near-full occupancy rate of 97.8%. NNN has a strong balance sheet, carrying investment-grade ratings from the three major ratings houses. The company has grown robustly through acquisitions, and is tapping capital markets for accretive funding for additional acquisitions in the future. At the beginning of this month, NNN reported a 14% increase in its recurring FFO from the prior year, and upped its 2013 FFO guidance from the range of $1.89-to-$1.93 per unit to a new range of $1.93-to-$1.97 per unit.

Another low-volatility REIT is Essex Property Trust (NYSE: ESS), a residential REIT that owns and manages high-quality multifamily properties on the West Coast. This REIT has been an underperformer among REITs; however, its bullish case is particularly strong, given that ESS operates in the markets with the highest projected rent growth through 2016, the markets in which it is still more economical to rent than to own housing. ESS operates in markets that are characterized by strong employment and income growth and favorable demographics. All its rental markets will see average annual rent growth between 3.3% and 4.4% between 2013 and 2016, above the average for the United States of 3.0%. The REIT owns 166 properties totaling over 33,000 apartment homes, and is well positioned to take advantage of the supply-constrained markets of California and Washington. In fact, the REIT’s main markets have a projected new supply below 1% of stock. This year, ESS will lead its peers based on the same-store NOI growth of 7.0%, which will be above the industry average of 5%. This REIT also has strong balance sheet with investment-grade ratings from the three major ratings houses.

Federal Realty Investment Trust (NYSE: FRT), a retail REIT owning shopping centers and street retail properties, is also a low-volatility equity. This REIT is most expensively priced among the five featured REITs, but its premium valuation is a result of its high-quality portfolio with assets located in infill locations with strong demographics, its strong operational performance, and its 45 consecutive years of annual distribution (dividend) increases. In fact, FRT’s dividend growth record is the longest in the REIT industry, and it testifies to the REIT’s resilience through various economic cycles. FRT has outperformed its shopping center peers based on the same-property NOI and has delivered cumulative FFO per share growth of about 41.3% since 2005. The company was unique among retail REITs as it posted positive leasing spreads in the most recent recession. Like some other REITs featured here, FRT recently boosted its FFO guidance from the range of $4.50-to-$4.56 to a new range of $4.55-to-$4.59 per unit. Given its relatively low payout ratio, FRT is likely to continue its long streak of dividend increases in the future. FRT carries an investment grade rating – in fact, it is one of the three REITs with an “A-” rating among some 166 REITs.


Home Properties (NYSE: HME), a multi-family REIT that owns apartment units in communities of the Northeastern, Mid-Atlantic and Midwestern United States, also boasts low-volatility characteristics. It pays the highest yield among the five REITs featured here, along with a relatively low payout ratio. As of the end of last year, this REIT owned 121 properties containing some 42,635 apartments. The company operates in high barrier-to-entry, high growth suburban markets, and is mainly serving moderate-income households. HME has seen a rising occupancy trend since early 2000’s, with the current occupancy rate hovering around 95.7%, for the company’s core properties. Improving occupancy and rising rents are boosting the REIT’s profitability, as it has recently reported a first-quarter gain of 9.6% in adjusted FFO from the year-earlier quarter. The company posted one of the best NOI growth rates in 2012 –about 8.1%– but is expected to report a less-robust NOI growth this fiscal year. Home Properties did raise its 2013 FFO guidance in early May, to a new range of $4.32-to-$4.44 per unit from the earlier guidance range of $4.28-to-$4.44 per unit. This REIT carries an investment grade rating from Fitch Ratings.

Last but not least among the low-volatility REITs is Camden Property Trust (NYSE: CPT), another multifamily housing REIT. The company operates 201 communities containing 67,850 apartment homes across the United States. This REIT is operating in markets with favorable demographic trends, characterized by increasing populations of young adults with a higher propensity to rent than to own housing. Moreover, the supply dynamics for CPT are also favorable, as multifamily supply continues to be below long-term averages. The REIT says “the new supply that’s being delivered in and started in 2013 doesn’t come close to meeting new demand and filling the supply deficit that was created during the financial crisis.” Like other multifamily REITs featured here, CPT shows strong occupancy trends, with the latest rate hovering around 95.5%. The REIT reported one of the best same-property NOI growth rates last year (9% year-over-year), and is expected to deliver a NOI growth rate of about 6.5% this year. Among the REIT’s less positive features is the fact that it slashed its cash distribution (dividend) during the 2009 financial crisis, even though it has paid cash distributions (dividends) since 1993. Still, the company has strong balance sheet and boast an investment grade rating.

In summary, as shown above, several low-volatility REITs offer attractive yields and consistent cash distribution (dividend) growth over a number of years. These low-volatility REITs can represent a good way to mitigate downside risks. The strategy can also serve to augment general income strategies by providing diversification to portfolios. Investors should weigh the defensive nature of these REITs and their income potential against the REIT’s elevated valuation, the industry trends, and the overall market’s projected trajectory. 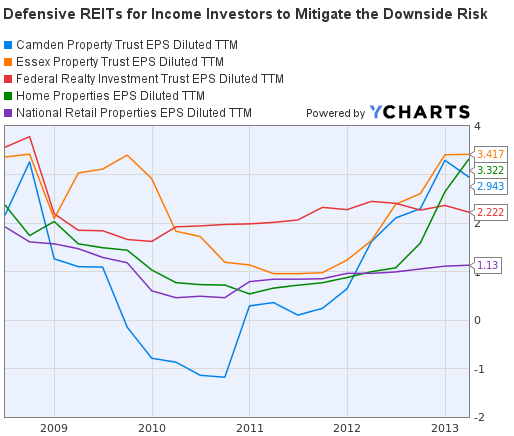 Preferred shares provide stable income even during black swan situations.With the sell-off, we have built up our fixed-income portfolio.Today we take a look at a REIT that has one of the highest-quality triple-net portfolios in the market. Co-produced with Beyond Saving When the market crashed, one of the first things we focused on buying were preferred shares. Our goals at "High Dividend Opportunities" are unsurprisingly dividend centric. We want to assure a high level of... Read more

Cap-weighted REIT yields are low in the present era, but this may be misleading as average yields are higher.We discuss the distribution of yields in a few REIT sectors.Buying a higher yield ordinarily means accepting both smaller market capitalization and higher debt ratio.The decrease in yield since 2009 arises from the decrease in average REIT debt ratio.We prefer to buy undervalued REITs whose higher yield is only temporary. Co-produced with R. Paul Drake for High Yield... Read more

Did the rent get paid? Rent collection and dividend cuts were the primary themes of the most newsworthy and consequential REIT earnings season since the Great Financial Crisis.Rent collection was largely a non-issue for residential REITs, who collected over 95% of April rents. Industrial, office, self-storage, and healthcare rent collection metrics were similarly strong.Economic shutdowns ravaged the economically-sensitive property sectors and punished highly-levered REITs. 50 equity... Read more