Chasing Yield in the Restaurant Business: A Glance at 6 Dividend Stocks

The National Restaurant Association’s Restaurant Performance Index, measuring the health of and the outlook for the U.S. restaurant industry, was released on Friday last week, showing an increased level of optimism among restaurant operators. The composite index reading for April 2013 climbed to a 10-month high, marking the third time in the past four months that the index reading stood above 100, signifying the expansion territory. The index reading representing current expectations was in the expansionary mode for the first time in eight months, while the index reading for the expectations index was at its highest in 11 months. The more optimistic outlook is a result of a “drop-off in the proportion of operators who expect conditions to worsen in the months ahead, which suggests a broadening of the perspective that the expansion is firmly entrenched”, according to the National Restaurant Association.

The more positive restaurant outlook suggests that the operating environment for the U.S. restaurant operators will improve, supporting better same-store sales growth and profitability down the road. These developments are a result of a generally improved economic and employment outlooks, as well as subsiding food price inflation. The market is counting the improved outlook will translate into better financial performance, but does it mean that restaurant stocks, including dividend payers among restaurant operators, now look poised for a notable pickup?

Below is a summary table featuring main performance and dividend characteristics of six restaurant stocks paying respectable dividend yields. Some of these stocks represent attractive income plays, especially for the long haul, such as the S&P Dividend Aristocrat McDonald’s (NYSE: MCD). While most of the featured equities trade with elevated valuations, some seem like good value plays, such as Brinker International (NYSE: EAT), which boasts a forward earnings multiple below that of its peers as a group.

Among the aforementioned stocks, all stocks pay dividends close to or above the average yield of the S&P 500 index. However, some are better positioned than others for increasing income streams in the future. DineEquity (NYSE: DIN) pays the highest yield; however, it also has the highest payout ratio. The company substantially boosted its dividend over the past 12 months, which elevated the payout ratio to the level that would suggest modest future dividend hikes, unless the company’s EPS expands robustly (Analysts see its long-term EPS CAGR at 10%). On the other hand, the world’s largest chain of fast-food restaurants, McDonald’s, has the most impressive history of dividend increases, as this S&P Dividend Aristocrat has raised dividends for 36 consecutive years. Brinker International, the owner of Chili’s Grill & Bar and Maggiano’s Little Italy restaurants, boasts one of the lowest dividend yields among the featured stocks; however, its payout ratio is only 34%, which supports the assumption that additional future dividend hikes are in the card, especially as analyst forecast a robust 14.0% EPS CAGR for the company for the next five years.

As regards McDonald’s, the company has a broad geographical reach, as it operates in 119 countries around the world, but it still derives about a third of revenues from the United States. Still, about 40% of its revenues come from Europe, which is still weathering a deep downturn. In April, McDonald’s same-store sales dipped 0.6% from the year earlier, mainly on the weakness in Asia –where avian flu took its toll, pushing sales down 2.9% in the Asia-Pacific, Middle East and Africa region– and in Europe, where they dropped 2.4%, amid a continued slump. U.S. same-store sales have started to pick up, rising 0.7% year-over-year in April, due to the introduction of “Premium McWraps,” an emphasis on cheaper menu items, and a solid demand for McDonald’s breakfast items. As a result, the company expects to grow its overall sales by 3%-to-5% this year and its operating income by 6%-to-7%, despite the continuation of a “challenging global environment.” While the United States is still important for McDonald’s operations, the company is shifting focus to emerging markets, where it plans a major expansion, including in China, which is one of its top expansion markets. This growth, along with a rebound in sales expected with an improved macroeconomic climate, should support a forecast EPS expansion of about 9% annually for the next five years, more moderately than in the previous five years on average.

YUM! Brands (NYSE: YUM), the owner of more than 39,000 restaurants worldwide, including the popular Taco Bell and KFC restaurants, will also benefit from the U.S. growth rebound. The company, which derives a quarter of its sales from the Unites States, reported a 2% year-over-year increase in U.S. same-store sales in the first quarter. However, YUM! Brands is now perceived as a predominantly China play, given that the company derives 51% of sales from the nation. Due to this exposure, YUM! Brands’ sales were bruised by a food safety scare and investigation in China about the excessive presence of antibiotics and hormones in its poultry. The resurgence of avian flu has also hit the company’s top line. In fact, the company’s April sales in China were down 29% year-over-year. These adverse developments will result in a mid-single digit decline in EPS this year versus the previous year, which will interrupt the company’s long streak of 11 consecutive years of pre-tax EPS growth above 13%. The company’s long-term EPS growth target is still 10%. As the food safety fears subside, YUM! Brands expects China sales to rebound in 2014, while analysts project an 11.7% EPS growth per year for the next five years. An impetus to this forecast growth will come from China’s expanding middle class. Despite its mild appreciation over the past year, the stock is still relatively expensive compared to its peers.


Darden Restaurants (NYSE: DRI), the largest owner of casual dining restaurants, such as Red Lobster and Olive Garden, is a respectable income play, given its high yield and an expressed commitment to keep raising its dividend in the future. Its dividend is one of the highest in the group, but this is partly due to its subpar share performance over the past year or so. The company’s total sales from continuing operations were up in the previous fiscal quarter – although same-store sales at its Olive Garden, Red Lobster and LongHorn Steakhouse restaurants dropped 4.6% from the year earlier. With a projected drop in the same-store sales of these three brands, the company projects a total sales growth of between 6% and 7% in 2013, driven by its specialty restaurant sales and acquisitions of Yard House restaurants. The company’s weak same-store performance of its main brand restaurants illustrates DRI’s weak competitive position relative to rivals, which may prompt the restaurant owner to significant boost promotional activities. Promotions would threaten price wars that would squeeze margins. However, the overall improvement in the jobs picture and the accelerating economy –which have led to the improvement in the aforementioned Restaurant Performance Index– could help ease the pains. Moreover, in the longer-term, the company’s positioning in the premium market with restaurants such as Eddie V’s, which are less sensitive to economic cycles, could be a winning long-term strategy.

Among the smaller players in the industry, Cracker Barrel Old Country Store (Nasdaq: CBRL), a specialty restaurant operator with some 621 company-owned stores in 42 U.S. states, is the biggest outperformer and a solid dividend growth play. The company has tripled its dividend since November 2011, and leaves more room for future dividend increases. Its dividend yield would have been much higher had the stock not appreciated substantially over the past year. The price outperformance is a result of a substantial run-up in sales and profitability. In fact, this week, the company reported its “sixth consecutive quarter of positive comparable traffic, restaurant sales and retail sales,” which is likely to continue as the industry fundamentals improve with the recharging economy. First-quarter diluted EPS was up 19% from the year-ago quarter, and the company raised its fiscal-year 2013 EPS guidance, based on the same-store sales growth of between 2.5% and 3.0%. Importantly, CBRL declared a 50% dividend hike for the dividend payable on August 5, which lifts its forward yield, based on the declaration, to a respectable 3.1%. Despite its huge price increase, the stock still trades on a forward P/E that is below the forward multiple of its peers as a group.

In summary, while the restaurant industry outlook is improving, the near-term conditions are not equally optimistic for all operators. Some companies, such as McDonald’s and YUM! Brands, have substantial foreign operations, which is weighing on their performance in the near term, but could lead to a significant EPS expansion in the long haul. As regards dividends, there are plenty of good income plays in the industry for research, but investors should consider valuations of individual stocks before pursuing yields. Some stocks, such as that of Cracker Barrel Old Country Store, have strong fundamentals that are likely to improve, which could lead to a continued robust share performance. Given its growth and forward yield, the stock could boast a good total return potential. Darden Restaurants looks attractively priced for long-term income. 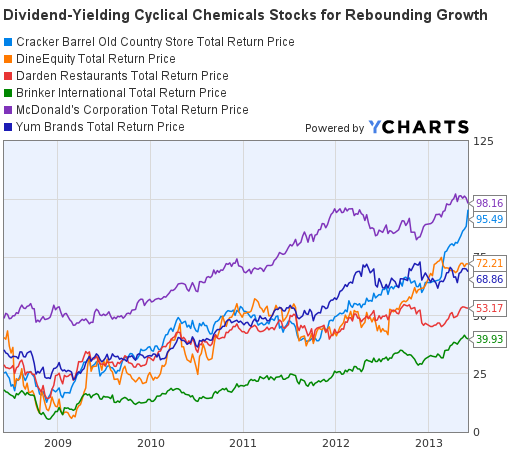 Actionable Conclusions (1-10): Analysts Predicted 15% To 68.3% Net Gains For Top Ten Russell 2000 Dogs By September 2018 Five of ten top Russell 2000 dividend dogs by yield were verified as being among the top ten gainers for the coming year based on analyst 1-year target prices. (They are tinted gray in the chart above). So, this yield-based forecast for Russell 2000 small cap dogs as graded by Wall St. wizards proved 50% accurate. Ten probable profit-generating trades were revealed in... Read more

Actionable Conclusions (1-10): Broker Analysts Predicted 26.43% To 48.27% Net Gains For Ten By September 2018 Four of ten top yield S&P SmallCap 600 dividend dogs were included among the top ten gainers for the coming year based on analyst 1-year target prices. (They are tinted gray in the chart above). So, this yield-based forecast for S&P SmallCap 600 dogs was graded by Wall St. wizards was 40% accurate. Ten probable profit-generating trades were revealed in YCharts for September... Read more

DineEquity: A Small-Cap That Packs A Big (Dividend) Punch

DineEquity (DIN) is company in transition. With a new CEO at the helm and number valuable brands under its umbrella, the company is looking to change. Currently, we believe the stock looks cheap, and investors can enjoy the high dividend while they wait for the turnaround to take effect. DineEquity Gears for the Future DineEquity recently announced that it was closing up to 160 Applebee’s (around 135) and IHOP (about 25) branches across the United States, more than doubling the number it... Read more

Actionable Conclusions (1-10): Analysts Predicted 20.9% To 86.7% Net Gains For Top Ten Russell 2000 Dogs By August 2018 Six of ten top Russell 2000 dividend dogs by yield were verified as being among the top ten of thirty gainers for the coming year based on analyst 1-year target prices. (They are tinted gray in the chart above). So, this yield-based forecast for Russell 2000 small cap dogs as graded by Wall St. wizards proved 60% accurate. Ten probable profit-generating trades were... Read more