The “wealth effect” is an economic concept that describes a propensity of consumers to spend more when their perceived wealth increases, and vice versa. This effect exerts a notable positive influence on retail sales when the stock market gains and housing price increases bolster household net worth, increasing consumer confidence in the overall economy and enticing them to boost spending. The effect is especially pronounced among high-income shoppers who own about 90% of U.S. equities and who account for about half the total spending in the United States.

In the first quarter of this year, U.S. household wealth reached record levels, eclipsing the pre-recession peak. The S&P 500 index has gained some 27.8% over the past twelve months, while home prices have advanced 10.9% year-over-year in March 2013 – the most in seven years, according to the S&P/Case Shiller composite index. Market developments in the current quarter suggest that net worth will continue to climb above the first quarter’s $70.3 trillion peak, supporting spending, as Americans feel wealthier. However, the impact has and will continue be partly moderated by this year’s tax hike that is making U.S. high-income earners somewhat more conservative in their buying behavior, as confirmed by Saks (NYSE: SKS) CEO in a recent earnings conference call.

Still, the confluence of several positive factors, including the stock market’s rally to record-high levels this quarter, continued U.S. housing appreciation, improving jobs picture, consumer confidence at six-year high, and the impending economic resurgence suggest that retailers will continue to benefit from the positive wealth effect, at least in the near term. This is particularly true for high-end retailers and home improvement stores. With this in mind, below is a quick overview of stocks that either have benefited or may see support from the continued wealth effect.

This table presents the main stock and dividend characteristics of the retailers exposed to the wealth effect. From the dividend-based perspective, they all pay modest yields that are either on par or below the average yield of the S&P 500 and the current yield on the 10-year U.S. Treasury bond. In most cases, that is partly a result of the retailers’ robust stock market returns over the past year, despite significant boosts to dividend payouts. However, as these retailers have relatively low dividend payout ratios, further earnings improvement provides a basis for continued dividend growth in the future. Among the featured plays, home-improvement retailers Lowe’s Companies (NYSE: LOW) and The Home Depot (NYSE: HD) have the highest forecast long-term EPS CAGR, at 17.3% and 14.8%, respectively. In the high-end retail sector, among the featured apparel, department store and jewelry retailers, Macy’s (NYSE: M) leads the pack with the forecast long-term EPS CAGR of 14.4%. These rates of growth lend confidence to the capacity of these dividend payers to boost their payouts at double-digit rates in the future. However, that assumption should be thoroughly researched on a case-by-case basis.

Coach (NYSE: COH), which likes to be perceived as a “lifestyle brand” and “affordable luxury” apparel, footwear, and accessories maker, is well positioned for growth, especially in emerging markets of East Asia and in Europe. The company’s North American division, which accounts for two-thirds of overall sales, was behind the estimates-beating performance in the previous quarter, as COH’s same-store sales in the region grew 1% from a year earlier and total sales, including e-commerce, rose 7%. Testifying to its robust emerging-market growth, China sales were up 40% year-over-year. Part of Coach’s positive story is also its expanding margins, which is a result of the company’s pricing power and strong branding. As an investment, COH represents a solid high-end retail play that has a strong balance sheet with almost no long-term debt and boasts exceptional profitability (with ROE of 50.9%). However, its valuation is not the lowest, as the stock carries a price-to-book ratio that is higher than the comparable ratio of its peers as a group.

Macy’s is likely another beneficiary of the wealth effect. In addition, in terms of its financial performance, the retailer has benefited from omnichannel integration and surging Internet sales that have driven top-line growth, while prudent cost management has propped up the company’s EPS. The company has reported fourth consecutive years of double-digit EPS growth, with same-store sales growth decelerating. While comparable sales growth topped 3.8% year-over-year in the first quarter –with overall sales up 4% in the quarter– the pace of same-store sales growth this year is expected to slow down to 3.5%, the slowest pace since 2010. Still, this pace of sales growth is set to beat the rate of U.S. economic expansion this year and is expected to mark the company’s fourth consecutive year of same-store sales growth above 3%. Given that analysts forecast for Macy’s a robust EPS CAGR for the next five years, the stock represents a solid growth at a reasonable price, notwithstanding its robust stock performance over the past year or so. Moreover, Macy’s may also represent a good investment for dividend growth.


Nordstrom (NYSE: JWN) has been an outperformer among its peers, as it successfully delivered total same-store sales growth of 8.5% last year, which supported a 12% gain in its bottom line. While its same-store sales growth of 2.7% year-over-year in the first quarter was below expectations, the company still maintains its projection of a 4%-to-6% gain in total sales and an increase of 3%-to-5% in same-store sales for 2013 as a whole. The weak start to the year may have been influenced by upper-income tax hikes and concerns about the impact of the sequestration and the Fed’s monetary stance on the economy and the markets. Unseasonably cold weather was also a notable factor. The company is uniquely positioned to benefit from the housing price boom in California, where it has about a quarter of its department stores and where home prices rose at above-average rates over the previous year. Nordstrom’s negative aspect is its heavy debt load, but this has not deterred the company from increasing dividends over the past years. The company’s planned entry into Canada and heavy investments in technology and booming e-commerce should also help its long-term growth.

Tiffany & Co. (NYSE: TIF), the high-end jewelry retailer, may also see some improvement in the Americas region, which in the first quarter reported a modest 6% increase in same store sales over the previous year, below the 9.0% rate of the worldwide net sales growth. Asia-Pacific, and in particular, Japan sales, were particularly robust – however, the significant drop in the Japanese Yen will adversely affect these gains on conversion. While Tiffany & Co.’s New York flagship store has already started seeing relatively stronger sales growth, the company’s management is still cautious about the outlook for the Americas region. This leaves some room for upside surprises from any U.S.-driven improvement in sales. When compared to its peers, Tiffany & Co.’s stock is not particularly attractive for income investors. It is also relatively expensive, given that the stock is trading above its long-term historical valuation averages.

Among the “wealth effect” plays, there are also the two behemoths of the home-improvement industry. The Home Depot and Lowe’s Companies have already seen strong outperformance over the past year, driven higher by the rebounding housing market, including reviving remodeling activity. Between the two, even though LOW is expected to deliver faster EPS growth in the long-term on average, HD has been posting stronger same-store sales growth. In fact, last quarter, HD delivered its 16th consecutive quarter of stronger same-store sales than LOW’s. Recently, HD has also declared higher dividend increases, and has authorized a $17 billion share buyback through 2015. Still, LOW has depended more on share buybacks to buttress its EPS expansion, which is only masking its underlying earnings weakness. It has authorized a $5 billion buyback through 2015. These two stocks can deliver higher dividends in the future, but given that HD is targeting a 50% payout ratio, its future dividend growth will have to rely more on its EPS growth than on the expansion of its payout ratio. In the end, the housing appreciation is likely to go through some consolidation as interest rates rise, which could weigh on the stock performance of these two retailers, at least in the near-to-medium term.

In summary, gains in the U.S. net worth are positively impacting the upscale retail space, including home improvement retailers. However, the wealth effect so far has not been as strong as expected, partly due to increases in high-income taxes and the uncertainty over the course of the U.S. monetary and fiscal policies, the stock market’s prospects, and the strength of the overall economy. Among the featured high-end retailers, Macy’s offers an attractive combination of growth and value, with a prospect for solid dividend growth. Coach has been an underperformer, but its emerging market prospects and the reviving North America sales could help it deliver stronger total returns in the future. Home improvement retailers are appealing based on the housing growth story; however, they have rich valuations and are showing modest underlying EPS strength when stripped of the stock buyback effect on EPS growth. 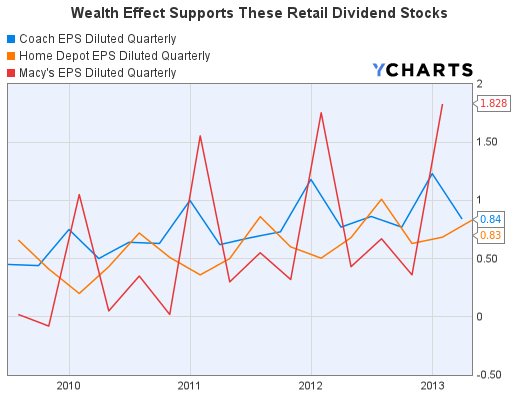 Dividend Massacre In This Crisis Is Already Breaking Records, But It Just Started

Mortgage REITs have reduced or eliminated their rich dividends.135 companies have announced in 2020 through Monday morning that they would reduce their dividends.All dividend actions so far this year through Monday amount to a cut in payouts of about $22.8 billion, according to S&P Dow Jones Indices, cited by the Wall Street Journal.Dividend yield can be an irresistible siren song in the era of central bank interest rate and bond yield repression: Harley-Davidson's (NYSE: HOG)... Read more

The Fed drives credit spreads even lower.Income investors are again forced to look for yield in equities.Seek safety in dividend payers, but not high dividends. The market of superlatives continues. This past week the rally in risk assets was fueled by another big action by the Federal Reserve. The Fed is moving into the junk bond market and will be buying broadly junk credit. This goes well beyond Financial Crisis era QE, which stopped at Mortgage-Backed Security (MBS) purchases.... Read more