Will There Be Dividend Cuts in the Gold Industry?

The gold industry has consistently proven to be a wise investment for dividend investors. For the last 15 years, the top 20 gold companies of the world have not only paid dividends consistently, they have increased their dividends at a compound annual growth rate of 16%. Another interesting fact is that the prices of gold increased annually by 12% during the last decade and a half. If you look at that data alone, the gold industry is a gold mine (pun intended) for dividend investors. The 2013 Global Gold Price Report indicated that gold companies were very hopeful heading into this year, with 80% of them indicating that they intended to increase the amount of dividend paid. However, this year, and especially this quarter, has been tough on the gold industry all over the world, with several companies making dividend cuts and some unlikely to pay a dividend at all. The prices of silver and gold are going down, and some are even calling it a slump. Some analysts are even advising their clients to steer clear of the gold industry at this point.

Looking at the dividend yields in the table, currently the percentages are handsome, and any dividend investor would be more than happy to invest in these stocks. However, the recent drop in the price of gold and the consequent losses these companies have had to suffer indicate that at least some of these companies will be announcing dividend cuts. The numbers from this quarter are not very encouraging, and if the average gold prices drop to anything below $1,200 per ounce, most gold mining companies will have to cut dividends and other expenses in order to survive. The following case by case analysis of all the companies mentioned in the above table further shed light on this dividend cutting assumption.

Newmont Mining (NYSE: NEM) follows a gold price-linked dividend policy according to which the quarterly dividend is based on the company’s average gold price for the previous quarter. NEM’s realized gold price in the first quarter of 2013 was $1,632 which led to a dividend cut of $0.35 per share in April. This low payout is attributable to the company’s gold and copper production which went down by 11% and 16% respectively on an year-on-year basis. Newmont Mining’s planned production is expected to increase in the second half of 2013 as the company is expecting a greater output from its mill in Nevada and Ghana.

Barrick Gold (NYSE: ABX) also announced a dividend of $0.2 per share. ABX first quarter profit fell by 18% mainly due to the low gold and copper prices. The company’s sales volumes haven’t been very impressive in the last few months. To make things worse, the Chilean government has ordered ABX to stop their mine construction on Pascua-Lama in Chile. The company has already spent around $ 4.8 billion on the project and a halt at this stage may further affect the ABX financial position.

IAMGOLD (NYSE: IAG) has also seen share price decline in the past few months. However, it has managed to declare a semiannual dividend $0.125 per common share this is to be disbursed on July 12, 2013. IAG low dividend is justified by the company’s announcement to invest in Golden resources. Profitable investment and capital expenditure is expected to further improve the company’s dividend payout in the future.

Kinross (NYSE: KGC) profits are highly sensitive to gold prices. Kinross shares declined by over 22% on year to date basis despite of its strong presence in South America, North America, West Africa and Russia. However, the increase in the net earnings as posted in the first quarter results along with the company’s announcement to proceed with the full feasibility report of the Tasiast expansion project is expected a give KGV share price a boost which will ultimately increase the overall value for shareholders.

Amidst the negative synergies caused by the declining share value and gold prices of some companies, the merger between Freeport McMoRan (NYSE: FCX) and Plains Exploration & Production (NYSE: PXP) brings in positive hopes for the Gold investors and stock market. The two companies are in the final stage of negotiations. In times when many other Gold companies are cutting dividends, PXP has declared a special dividend of $3 per share that will be disbursed prior to the finalization of merger with FCX. At the same time, Freeport’s board also revealed their intentions to announce a supplemental dividend of $1 per share that it plans to give out immediately after signing the acquisition. Now this is surely something to celebrate for by both the company’s shareholders.

Goldcorp (NYSE: GG) is another company that has not been much affected by the factors negatively affecting the Gold industry. Goldcorp has been given monthly dividends to its shareholders since 2003. Continuing this legacy, the company recently announced the fifth monthly dividend payment for the year 2013 of $0.05 per share.

Some of the gold mining companies are trying to improve the efficiency of their supply chain, are reducing costs and expenditures wherever they can, and are cutting back on exploration activity to save capital and to ride out the storm. Companies that do not completely rely on gold mining operations and have a diverse portfolio will be able to cover some of their losses through their earnings from other sectors, and it seems that their share holders can breathe easy for the time being.

Summing up, if there is a continued decline in gold prices throughout this year, dividend cuts are inevitable. However, we are only half way through the year and it is too early to start selling your shares, but if you are looking to make an investment in the gold industry, now might not the best time. 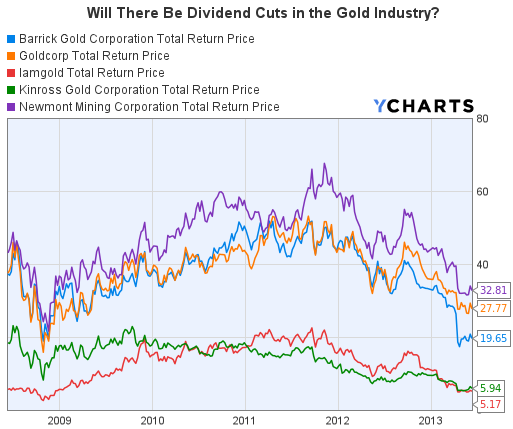 The Fed is providing a lot less USD liquidity than many believe and is not keeping pace with bond issuance from the US treasury thus far in Q2.Over the intermediate term, gold will track the CPI lower as it moves into deflation. Declining U.S. retail sales, industrial production and GDP growth are leading price index indicators.Yield Curve Control is under consideration by the Federal Reserve, but I view it as a negative and ineffective way to conduct monetary policy.According to... Read more

Gold Gets A Boost Of Rocket Fuel From Negative Bond Yields

Ladies and gentlemen, we have liftoff! After breaking out of a five-year trading range, the price of gold surged above $1,400 an ounce last week for the first time since 2013 on expectations of a U.S. rate cut. The 10-year Treasury yield fell to around 2 percent, its lowest level since November 2016. Meanwhile, the pool of negative-yielding government bonds around the world hit a fresh record high of $13 trillion. Gold "may finally be off the leash," Bloomberg's commodities... Read more

There Is More To Iamgold's Dividend Elimination Than Meets The Eye

On Wednesday, December 11, IAMGOLD (IAG) announced that it would be suspending its dividend of $0.25/share/year, or $94 million, sending shares plunging more than 10% to their lowest level in over 5 years. This is substantial considering the unusual strength seen in gold mining shares more generally, which fell less than 1% on a day when the gold price was down over 2%. On the surface it might appear that the company is simply reacting to lower gold prices--it is not a low cost producer and it... Read more

Gold Companies That Can Afford Their Dividends

Spot gold prices have fallen more than 30% from the record $1,921 per ounce reached in September 2011 as sentiment reversed amid signs that global economic stimuli policies, known as quantitative easing, failed to yield commodity-friendly inflation witnessed during prior cycles of expansionary monetary actions by central banks. Despite deep dividend cuts by industry leaders like Barrick Gold (ABX) and Kinross Gold (KGC), there are still a few gold-mining stocks out there that can pay healthy... Read more