According to asset manager BlackRock, dividend growth stocks historically have outperformed other asset classes in low-growth or no-growth environments. Moreover, historically, “dividend growth has kept up with all but the most extreme inflation environment.” In the current environment, they still represent popular investment choices, in particular as markets factor in the threat of rising inflation. This is so because investment strategies focused on dividend growth enable investors to generate increasing income streams over time, offsetting the adverse effect of inflation. 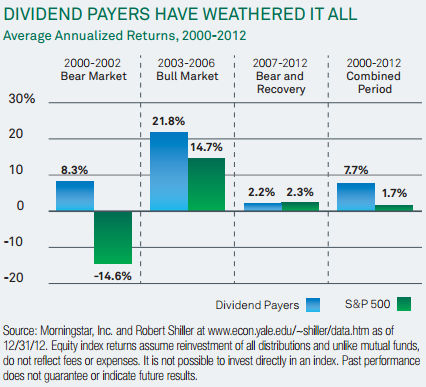 Strong profitability and rising cash flow has enabled many companies to boost their dividends in recent years. Some have increased their payouts generously and for long uninterrupted periods of time, showing confidence in the long-term sustainability of their generous dividend policies. Thus, there is a number of stocks that represent good candidates for long-term dividend growth portfolios. However, the focus should be put on those that have a sustained earnings power and capacity to pursue dividend growth over both up and down business cycles.

As regards Chevron, this second largest U.S. integrated energy company, has been an avid dividend grower for decades, with an average annualized dividend growth of 9.1% over the past five years. Its dividend growth rate over that period was lower than its EPS growth rate, which stood at 13.7%, on average. Among its main competitors, CVX has had the highest rate of dividend growth since 2004. Even though the company is expected to post a paltry EPS CAGR of less than 1% for the next five years on average, its solid cash flow generation will likely support continued dividend increases. In fact, the company explicitly states that one of its consistent financial priorities is to “maintain and grow dividend.” The company has strong balance sheet, with $17.3 billion in cash and only $12.1 billion in long-term debt. In fact, its long-term debt is only 8.6% of its stockholders’ equity. CVX has the highest profitability per barrel among its peers and the highest cumulative cash flow per share expansion over the past five years. Thus, its case is supported by leading earnings and cash margins, strongest future volume growth among its main peers, and solid shareholder value enhancement potential. It should be noted that the company is known for its generous share buyback programs – it returned $5 billion in share repurchases last year alone.

Philip Morris International (NYSE: PM) is one of the world’s largest cigarettes companies selling seven of the top 15 international brands, including the number one brand, Marlboro. The company is an excellent example of a firm benefiting from an inelastic demand and earnings stability throughout business cycles. The company receives all its revenues from outside the United States, which does expose it to foreign currency volatility. That adverse effect has had a notable effect on earnings this year. However, PM has navigated its headwinds well, given its strong brands, pricing power, and robust organic growth, which is higher than that of its U.S.-based peers. Anticipating that the bulk of EPS growth this year will occur in the fourth quarter, the company projects a 10% to 12% EPS growth rate, excluding currency effects. Over the long-run, analysts forecast EPS CAGR of 11.2%, on average, which will be partly supported by strong share buyback activity. The company has plenty of money available for buybacks, as it approved a three-year $18 billion share buyback program in August 2012. The stock’s combination of yield and dividend growth is attractive and comes with a reasonable valuation.

Cisco Systems, the networking giant, has the shortest streak of dividend growth among the featured stocks; however, its dividend increases have been exceptionally large. Cumulatively, the company has increased its dividend by 183% since March 2011, showing preference for returning cash to shareholders in the form of dividends. Cisco Systems has solid balance sheet with low debt and ample cash and short-term investments. It also generates large operating cash flow. Even amidst a weak macro environment, the company has been able to achieve record revenues for nine consecutive quarters. Cisco says it is “excited about the future,” as its sees growth from cloud computing, wireless/mobile, and video, which will join together to deliver the Internet of Everything. In fact, just for illustration, Cisco sees tremendous growth in cloud computing, which IDC forecasts will account for 27% of all IT spending by 2020, up notably from the 4% share in 2012. Cisco is proactively pursuing acquisitions to take advantage of rising opportunities in the noted growth sectors. With a relatively low payout ratio and a forecast long-term EPS CAGR of 8.3%, the stock could deliver dividend growth in the future.

Last but not least is Walgreen, the largest U.S. drugstore chain, which boasts the longest streak of consecutive yearly dividend increases in this group. Over the past five years, the company grew its dividend at a CAGR of 23.7%, yet it still has succeeded to maintain its payout ratio low at 34%. Such a low payout ratio amid several decades of robust dividend growth testified to the ability of this company to generate strong earnings through various economic cycles. The company is currently recovering customers lost in its earlier impasse with Express Scripts (Nasdaq: ESRX), which has been resolved but has adversely reflected on Walgreen’s sales and financial performance. The company’s sales trends in recent months have been improving, as has its long-term potential with the new supply partnership with AmerisourceBergen (NYSE: ABC), which will not only result in earnings accretion but will create opportunities for Walgreen to assume a minority stake in the drugs wholesaler. Walgreen has an ambitious plan to grow its revenue from $72 billion in 2012 to $130 billion by fiscal year 2016. Its operating cash flow is expected to almost double over that period. The company’s push to achieve these targets will be supported by the Express Scripts’ multi-annual contract, accretion from Alliance Boots strategic partnership, private brand momentum, AmerisourceBergen deal, along with a slew of positive influences from the rapidly aging population, healthcare reform implementation, and generic penetration. However, it should be noted that by fiscal 2016, Walgreen’s net debt is expected to swell to $11 billion from $4.1 billion in 2012.

These four dividend stocks represent good research candidates for long-term dividend growth portfolios. They have proven their commitment to increasing shareholder value through higher dividends. While some of them, such as Cisco Systems Inc., have short histories of dividend growth, the opportunities for earnings and cash flow expansion in the future point to their capacity to continue their robust dividend growth. In fact, their consistent dividend increases point to their confidence in these companies’ long-term earnings prospects.

Philip Morris International (PMI) Increases Dividend by 1.6% to Annualized Rate of $5.08 Per Share