Value investing revolves around the concept of buying stocks of companies that are priced below their intrinsic values. That undervaluation is based on metrics such as price-to-book ratios, price-to-earnings ratios, or dividend yields. According to research by professors Eugene Fama of the University of Chicago and Kenneth French of Dartmouth College, value stocks have outperformed growth stocks by an average of four percentage points since 1926. That differential holds around 3.7 percentage points in favor of value versus growth since the beginning of the year and whole 9.3 percentage points over the past 12 months, based on price returns of the Russell 1000 Value Index and Russell 1000 Growth Index. Even though the economy is expected to shift into a higher gear soon, increasing the appeal of growth stocks, value investing remains an attractive long-term investment strategy for patient investors.

The table above shows profile and dividend characteristics of five stocks that could be further researched as potential candidates for inclusion in long-term dividend value portfolios. These stocks are trading at low earnings multiples or are offering a combination of low valuation and relatively high dividend yields. Among the aforementioned stocks, Western Digital (Nasdaq: WDC) and John Bean Technologies (NYSE: JBT) have produced significant total returns over the past 12 months, driven by escalating prices. Still, these two stocks have attractive forward multiples, coupled with potential catalysts for further price appreciation. In terms of dividend growth, both stocks boast significant potential for robust dividend growth in the future, which could further support their price growth. On the other hand, Garmin (Nasdaq: GRMN), the maker of GPS and other navigation devices, has a short dividend growth record, but it still offers an exceptional yield, which is partly a reflection of investor fears about the long-term viability of this business. Deere & Company (NYSE: DE), one of Warren Buffett’s picks, is undervalued based on its price-to-book, price-to-sales, and price-to-earnings ratios.

John Bean Technologies, a leading supplier of technology solutions to the food processing and air transportation industries, trades at both trailing and forward earnings multiples below those of its peers as a group. The company is also trading at a price-to-sales of only 0.7, which is half the value for its industry on average. JBT Corporation has a leading position in its industries, serving blue chip companies. The company also has a wide geographical reach, as it derives revenue from over 100 countries, with a quarter of sales coming from emerging markets. Some 45% of its revenues are on a recurring basis. JBT Corporation is implementing a major margin expansion push through top-line growth and margin-improvement initiatives, targeting a 12%-to-13% operating margin for its JBT FoodTech segment by 2015 (up 330 basis points) and a 10% operating margin for its JBT AeroTech segment (up 60 basis points). In 2013, buoyed by record backlog at the end of the first quarter, JBT FoodTech segment is projected to produce mid-to-high single digit percentage revenue growth, while JBT AeroTech segment is expected to achieve mid-single digit percentage revenue growth. Analysts project a 15.9% increase in the company’s EPS this year. The company has solid balance sheet with strong cash flow generation capacity. This factor supports future dividend growth, given that JBT Corporation boasts a low dividend payout ratio and is expected to deliver a 12% EPS CAGR for the next five years, on average.

Garmin has seen its share of troubles rise along with the proliferation and penetration of mobile computing devices such as smartphones. The company has seen its revenues and profits plunge amidst strong competition from navigation applications for mobile phones, such as Google Maps. This has lead to falling navigation device prices, hurting margins and thus the company’s profitability. Particularly weak has been the company’s automotive segment, which saw a 10% decline in the first-quarter sales. Its marine segment has also been a drag on sales and earnings. However, the company is pinning its hopes on OEM integration in the marine and auto segments, which is starting to materialize through an auto OEM relationship with Mercedes Benz that will begin this year – the automaker will include Garmin’s navigation software to most of its models by 2017. Moreover, growth is expected to come from the aviation segment through integrated flight decks for business jets and helicopters. Strategic alliances and acquisitions should further support the company’s long-term viability and growth. Still, Garmin stock remains out of vogue with investors, reflecting their fears about the company’s future prospects. Some even raise concerns about sustainability of Garmin’s dividend, if the slide in sales continues. However, the company has solid balance sheet without any long-term debt and with over $2.7 billion or 59% of total assets in cash and marketable securities.


Western Digital Corporation, a leading market hard disk drives (HDD) maker, has been troubled by the secular decline in the PC market. PC HDD revenues hit a record $30.6 billion last year; however, they are expected to decline to $26.4 billion this year, as PC HDD shipments decline 8% from the year earlier and prices continue to moderate. According to IHS iSuppli, from 2012 to 2017, PC HDD shipments will contract at a 2.9% CAGR. What stands in contrast to these trends is the robust growth in the PC solid state drive (SSD) shipments, which will grow at a 48% CAGR over the next five years. WDC beat analysts’ fiscal third-quarter estimates on a 26.7% gain in revenues, but its non-GAAP net income per diluted share was 16.7% lower than in the year-ago quarter, amid a major margin contraction. Generally, the market is expected to start growing in the second half of this year. The robust growth in the higher-margin enterprise market will offset weakness in the PC market and will thus be the company’s major growth driver. Cloud storage market trends will also be supportive of the HDD market demand. Introduction of Western Digital’s 5-terabyte HDD with a new helium technology for higher disk capacity and lower power use bodes well for solidifying the company’s leadership position in the enterprise market. WDC has an exceptionally low payout ratio, and judging by the dividend growth track record of its main competitor Seagate Technologies (Nasdaq: STX), WDC looks poised for major payout boosts in the future. WDC has been trading below historical valuation due to fears of the adverse impact of the declining PC sales on the HDD market and concerns about SSD cannibalization.

American Railcar Industries (Nasdaq: ARII), the maker of hopper and tank railcars, has seen a tremendous boost to its operational performance from the shale oil and natural gas boom. Last year, the company recorded best-ever earnings, with revenues some 37% higher than a year ago. What bodes well for the company is the continued shale oil capacity expansion, the need to replace the aging hopper and tank railcars, and the overall population and trade growth driving demand for freight railcars in the future. Moreover, the company’s leasing business is set for robust performance, which could prop up the company’s top- and bottom-line in the future. Furthermore, there is potential for emerging-market expansion, especially in India, Russia, and Saudi Arabia. Still, there are concerns that oil pipeline construction completions will reduce the demand for tank railcars in the longer run, adversely affecting ARII’s financial performance. The company reinstated its dividend in the final quarter of 2012. This stock is priced very cheaply based on the forward earnings multiple. Its price-to-sales is also low at 0.9. The stock offers an attractive yield and boasts a notable dividend growth potential.

Deere & Company, the farm and construction equipment manufacturer, is one of the newer additions to Berkshire Hathaway’s portfolio. In the second quarter ended April 30, despite headwinds in the construction market, this company reported new single-quarter records in sales and income. Its overall sales and revenues increased 9% year-over- year in both the quarter and the last six months, mainly driven by the agriculture segment sales, which increased 12% year-over-year in the quarter and 14% on the same basis for the past six months. Despite the challenging global economic environment, Deere expects to realize record earnings for the year, with equipment sales projected to grow by 5% this year. In the near term, the company is likely benefitting from net farm income, adjusted for inflation, hitting the highest level since 1973. Even net cash income, down almost 9% from 2012, is expected to remain high by historical standards when adjusted for inflation. In the long term, the company will benefit from the population growth worldwide, and especially from rising incomes that will lead to higher grains production. Moreover, emerging market urbanization and recovering North American construction will give an additional boost to the company’s financial performance in the long run.

In summary, the aforementioned five dividend value stocks offer current income with a prospect for long-term capital growth. They carry different risk profiles and should be closely scrutinized. Western Digital Corporation has the best prospect for dividend growth in the future, although companies like Deere & Company boast consistent dividend growth over many years. Garmin offers attractive dividend yield, although the company’s long-term dividend prospects rest on its ability to reignite growth. 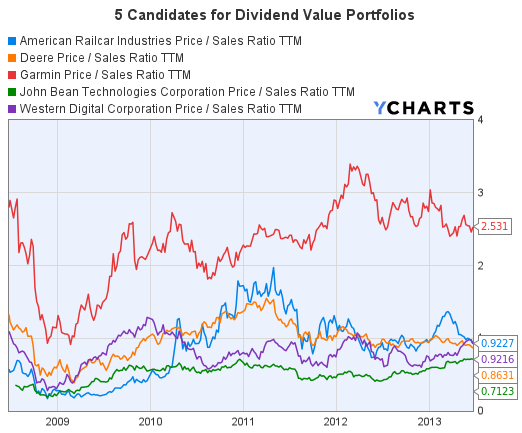 Buy Seagate For The Dividend Income

These four trades expire in under two months.The yields are more than 24% to ~41% annualized.Both tech stocks pay dividends during this time. Tech has been the leading sector over the past year, rising more than 26%. Although it lost ~-1% this week, it still leads all other sectors year to date, with an ~8% gain. With that in mind, we went looking for some tech options trades which might capitalize on the recent volatility and on upcoming quarterly dividends from this... Read more