Investing in cigarettes has been a lucrative undertaking. In fact, over the 10 years through year 2011, tobacco companies, as measured by the MSCI World Tobacco Index, had the best risk-adjusted return out of 67 industry sectors in the MSCI World Index, according to research released last year by BNY Mellon Wealth Management and Janney Montgomery Scott. Notwithstanding the adverse market environment due to increased regulation, litigation, and the trend of a decreasing prevalence of smoking in the developed world, such a strong performance has been a result of persistent pricing power amid a generally price-inelastic demand for addictive cigarettes, strong branding, and, in some cases, the expansion in emerging markets. With consistent (and recession-resilient) cash flows, the tobacco industry has been known as a source of dependable dividend income.

While the reputed cigarette-makers such as Altria Group (NYSE: MO), Philip Morris International (NYSE: PM), and British American Tobacco (LSE: BATS)(NYSE: BTI), are industry leaders grabbing all the attention among dividend investors, there are also some less-known dividend-paying companies in this or related industries that investors may have come across. The table below shows the stock profile and dividend characteristics of three companies that are either direct or indirect players in the tobacco/cigarettes industry.

Among the aforementioned stocks, Vector Group (NYSE: VGR), a discount cigarette maker and a real estate company, has the highest dividend yield; however, its elevated yield is a reflection of investor concerns about the sustainability of the company’s dividend, given that the company’s dividend payout ratio stands well in excess of both earnings and free cash flow. Universal (NYSE: UVV), the leading global leaf tobacco supplier with operations in more than 30 countries, has the longest streak of consistent annual dividend increases – some 42 years in a row. Therefore, its reliability and dividend dependability through all business cycles are its most appealing features. On the other hand, Schweitzer-Mauduit International (NYSE: SWM), the world’s largest maker of cigarette paper, has been boosting significantly its dividends recently. This stock could represent a good play on dividend growth driven by expected strong free cash flow generation.

Universal
The company is not a cigarettes manufacturer, but is a leaf tobacco merchant and processor supplying leading cigarettes manufacturers. UVV boasts a strong record of dividend growth, which, given the company’s relatively low dividend payout ratio, is likely to continue into the following years. As a testament to its strong cash flow position, the company generated more than $230 million in operating cash flow in fiscal 2013, ended March 31 this year, and it used $70 million of that money to cover dividends and share repurchases. While the company’s revenues stayed mostly flat in the past fiscal year –mainly amidst lower volumes and higher average prices– UVV still realized a 4.1% increase in segment operating income. Moreover, the company has been trimming its costs through targeted cost-reduction and efficiency improvement initiatives. On top of that, UVV has repaid some $103 million in debt, bringing down its long-term debt-to-equity to 14.4% as of the end of March 2013. Even though UVV expects somewhat softer shipment volumes in fiscal 2014, it still sees robust sales activity for its main products, the flue-cured and burley tobaccos.

UVV is a consumer noncyclical stock, but it does not boast a low beta. Instead, its beta is generally somewhat higher than the market’s. The stock is attractively priced at a forward P/E of 11.4x, with a high free cash flow yield of 11.7%, according to Finviz data.

Vector Group
This is a holding company engaged in cigarettes manufacturing and sale through its Liggett Group LLC and Vector Tobacco Inc. subsidiaries. The company also operates a real estate business under its New Valley LLC subsidiary. Vector Group is focused on the discount segment of the U.S. cigarettes market. Its main brands include Pyramid, Grand Prix, Liggett Select, Eve, and USA. Liggett’s domestic shipments of approximately 10.1 billion cigarettes in 2012 accounted for 3.5% of the 286 billion cigarettes shipped in the United States. That market share has not changed dramatically over the past three years. However, given the dominance of Philip Morris and RJ Raynolds (NYSE: RAI) in the U.S. market, Liggett is operating under pricing pressures and is facing struggles in a competitive industry in terms of securing shelf space. Last year, Vector Group’s revenues of $1.09 billion were marginally lower than in the year earlier, primarily because of an 8.1% drop in unit sales that was offset in part by higher pricing. Still, its 2012 operating income was 8.1% higher year-over-year on higher margins. On the other hand, Vector Group has large liquidity constraints, given that its dividend payout exceeds available cash flow, and it carries significant debt on its balance sheet.

The company has been paying a combination of a quarterly cash dividend and an annual 5% stock dividend. This practice has been dilutive, and the market is assigning a risk of a dividend cut in the future given that VGR’s dividend is not fully covered by either earnings or free cash flow. In fact, unlike many of its peers, VGR has seen its free cash flow deep in the red over at least the past five years.


Schweitzer-Mauduit International
The company is a leading cigarette paper and reconstructed tobacco leaf (RTL) manufacturer. Its operations are fairly well diversified globally, with Western Europe accounting for a 28% share of total revenues, North America for a 27% share, Eastern Europe for a 13% share, and China for a 12% share. According to the company’s presentation, SWM’s top six customers account for about 80% of the global market production (including China). With over 25 years of presence in China, SWM is well positioned to capitalize on the expanding Chinese and Asian market growth. While cigarette consumption is declining in the developed, mature markets, and is growing at a modest 0.5% annual rate globally, in Asia it is growing at a CAGR of between 2.5% to 3.0% annually. The long-term trends are positive as increasing incomes enable an increasing number of emerging Asia/China consumers to trade up to premium brands sold by the company’s customers.

While the company’s net sales were flat in the first quarter from the year earlier, with strong Lower Ignition Propensity (LIP) cigarette paper sales and weaker RTL sales, SWM remains on track to deliver a 4.2% increase in adjusted EPS this year. This follows an 18% jump in adjusted EPS last year. Along with these trends and with long-term debt at 30% of total equity, continued strong cash flow generation is likely to support the company’s shareholder-friendly capital allocation policy. In fact, SWM has increased dividends by fourfold over the past year or so, and is targeting to return, over the long term, at least one third of its free cash flow in the form of balanced dividends and stock buybacks. This policy is supportive of the company’s long-term total return potential. For the reference, the company currently pays about 28% of its free cash flow in dividends. (On top of this, SWM is attractive based on a forward P/E of 12.1x.)

In summary, while dividend yields of the aforementioned three small-cap stocks in the tobacco and related industries –except for VGR– are generally not as lucrative as those of the major cigarettes makers, they are still competitive relative to yields in other industries. However, it should be noted that VGR carries substantial risks in terms of its continued capacity to fund dividends over the long term, while both UVV and SWM appear alluring in the context of dividend growth investing strategies. 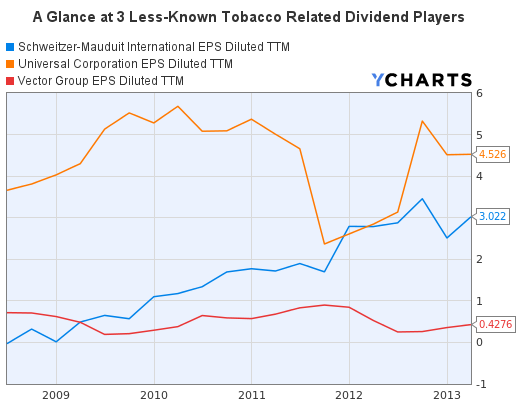