Despite a net interest margin squeeze due to persistently low interest rates, the U.S. banking industry has reported year-over-year earnings increases for some 14 consecutive quarters, according to Dick Bove of Rafferty Capital Markets. Some of the banking stocks have been solid dividend payers, serving as alternative income-producing instruments in the yield-starved investment environment. While the universe of dividend payers in the banking industry is extensive, there is a limited number of dividend-yielding banking stocks that offer dividend consistency and earnings sustainability, as well as a solid financial standing. Here is a selection of four dividend-paying banks with at least $1 billion in assets and with solid financial strength, strong returns, and market liquidity. These stocks have offered consistent dividends and yields well above the average for both the banking industry and the broad market indices such as the S&P 500.

The four banking stocks whose profile and dividend characteristics are described in the table below are selected because they are both members of the Morningstar® Dividend Leaders Index, which comprises of top-yielders among U.S. market dividend stocks, and constituents of the Weiss Ratings’ Portfolio of High Dividend Bank Stocks, with Weiss Financial Strength Rating above B-, describing their solid financial security and capacity to cope with adverse financial and economic developments.

The banking stocks featured in the table, namely Bank of Hawaii (NYSE: BOH), Community Bank System (NYSE: CBU), United Bankshares (Nasdaq: UBSI) and Westamerica Bankcorp (Nasdaq: WABC), rank among 100 highest-yielding stocks in Mornigstar’s Dividend Composite Index selected for dividend consistency and sustainability out of a broad market index constituents representing 97% of the overall market capitalization. These four banks, members of the 100-member Morningstar® Dividend Leaders Index, have five-year dividend growth at or above zero –suggesting a stable history of dividend payments, according to Morningstar– and the dividend coverage ratio above 100%, indicating that their dividends are at least fully covered by earnings. While Morningstar® Dividend Leaders Index features a few additional banking and savings and loan stocks, the featured four banking stocks stand out among banking stocks because of their solid financial standing, based on the Weiss Ratings’ proprietary rating system, which indicates their relative safety compared to peers.
Weiss Ratings are derived, for the most part, from quarterly financial statements filed with federal regulators. A B-rating means that the institution offers good financial security and has the resources to deal with a variety of adverse economic conditions. It comfortably exceeds the minimum levels for all of the rating criteria, and is likely to remain healthy for the near future. The plus sign is an indication that the institution is at the upper end of the letter grade rating, whereas the minus sign is an indication that the institution is at the lower end of the letter grade rating.

Among the aforementioned banking stocks, three out of four, namely Bank of Hawaii, United Bankshares and Westamerica Bankcorp, have not raised their dividends over at least the past 12 months. In contrast, Community Bank System raised its dividend for the 20th consecutive year in September 2012. As a result, the bank has become a member of the S&P 1500 Dividend Aristocrats Index, which represents companies with at least 20 consecutive years of dividend increases. Among the four, Community Bank System has the highest forecast EPS CAGR –at 10% annually for the next five years– which should help the company create room for continued dividend hikes in the future. For the other three banking stocks, analysts see modest, mid-single digit EPS CAGRs for the next half-decade, which also may support modest dividend increases in cases where payout ratios are not excessive.

In summary, the dividend yields of the aforementioned four banking stocks continue to be competitive, offering alternatives to modest savings deposit yields or the still-lower Treasury bond yields. The solid financial standing of these banks supports their appeal as prudent dividend choices. However, among the featured banks, Community Bank System offers the longest uninterrupted dividend growth record, with a prospect for continued dividend hikes in the future. As for the other three, additional gains in prices without dividend increases would drive dividend yields on these stocks lower in the future, making them less competitive to alternatives. Valuations of these four bank stocks should also be taken into consideration along with the banks’ returns on equity (ROE). 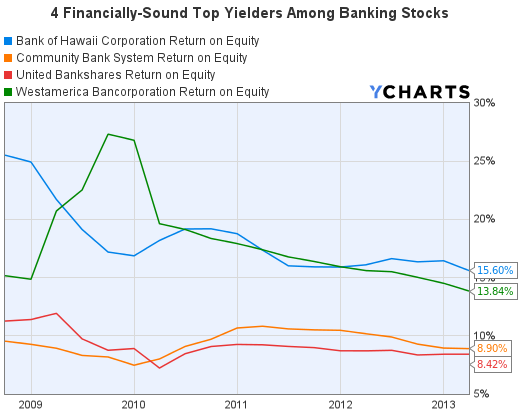 United Bankshares, Inc. (NASDAQ: UBSI) today announced that its Board of Directors declared a first quarter 2021 dividend of $0.35 per share for shareholders of record as of March 12, 2021.... Read more