In his book Contrarian Investment Strategies in the Next Generation, renowned contrarian investor David Dreman noted that legendary value investors Benjamin Graham and David Dodd were convinced that “investors overemphasized near-term prospects,” overpricing companies for which those prospects were strong and underpricing the ones for which the near-term prospects were poorer. Historical evidence shows that contrarian/value investment strategies based on price-to-earnings, price-to-book, and price-to-cash flow ratios, as well as strategies based on low/high measures of EPS growth, have performed exceptionally well. While in the current market the accelerating economic growth has improved the outlook for the pro-cyclical, high-beta growth stocks, there are still some potential contrarian plays that deserve a closer look. The REIT sector saw some heavy selling in late May and June amid expectations that higher interest rates will increase acquisition and refinancing costs and will diminish the appeal of bond-like REITs with long-term leases. These risks still exist. However, among publicly-traded REITs, there are several potential contrarian plays that pay high dividend yields. The table below presents the performance and dividend characteristics of three such REITs.

All featured REITs trade at attractive valuations, based on their prices-to-FFOs. They also yield at least 4%, which still makes them more competitive than the escalating yields on the 10-year Treasury bonds and the average 2.1% yield of the S&P 500 index. Historical dividend/distribution growth of these REITs exceeds the rate of inflation, and their relatively low payout ratios suggest that there is still more room for dividend/distribution growth in the future. Among these three potential contrarian plays, Ashford Hospitality Trust (NYSE: AHT) has the lowest payout ratio, which is below the average for its main peers, while its yield is higher than that for its peers on average. Associated Estates Realty (NYSE: AEC) offers the highest yield among these three contrarian plays (which also exceeds the yield of most of AEC’s peers); however, that yield is also accompanied by the highest payout ratio.

CBL & Associates Properties (NYSE: CBL), one of the largest U.S. mall REITs, owns, holds interests in or manages some 159 properties including 95 market-dominant enclosed malls and open-air centers. The company offers a dividend/distribution yield that is higher than the yields of its main competitors, including Simon Property Group (NYSE: SPG) and General Growth Properties (NYSE: GGP). However, it also trades at forward valuation that is at a significant discount to CBL’s noted peers. For the reference, CBL’s price-to-forward FFO is only 10.4x, while SPG’s forward valuation metric is 19.0x. Part of the explanation is CBL & Associates’ heavier debt load. Still, the company has seen solid FFO growth over the past few years, benefiting from higher occupancy rates. Its outlook is relatively sanguine, with expectations of continued organic growth and growth through acquisitions. The resilient U.S. consumer spending –which is expected to receive a lift from accelerated employment and income growth– supports continued strength in the retail REIT sector.


Associated Estates Realty is a residential REIT owning some 52 stabilized properties that contain 13,950 units located in ten U.S. states. This REIT has experienced above-average NOI growth over the past five- and ten-year periods. Last year, its occupancy was above 96% and its average rent per unit saw a strong 13.6% rise. AEC’s market fundamentals are solid, reflecting strong demand and modest new supply. These fundamentals are resulting in sustained fixed-charge coverage, which has been improving since 2009. The company is growing through acquisitions and is reducing leverage through follow-on common stock offerings. Moreover, AEC boasts one of the highest dividend/distribution yields among the multifamily housing REITs. Yet, it also boast the lowest FFO multiple among its main peers. Still, the company’s balance sheet is under pressure by some large near-term debt maturities.

Ashford Hospitality Trust, a hospitality REIT, focuses on “diversified hotel investments across capital structure, hotel property type, market and brand”. The company may look appropriate for the current market cycle, given that it invests in assets with inflation protection. Its market fundamentals are positive, characterized by rising occupancy, real RevPAR and average daily rate growth, coupled with historically low supply and rising hotel room values. In fact, as a sign of strong market fundamentals, U.S. RevPAR is expected to grow at a CAGR of 5.9% annually for the next five years, which is a rate nearly double the projected growth rate of the U.S. and global economies. The company uses derivatives to hedge interest rate risk, which makes its FFO variable. However, based on the 2013 consensus EBITDA, this REIT is trading at a discount to its industry on average. The company is in the process of spinning-off its high RevPAR hotel portfolio. Interestingly, AHT has one of the highest percentages of insider ownership in its respective industry, which signifies its management’s close alignment with shareholder interests.

In summary, these REITs offer relatively high dividend/distribution yields that provide a cushion against a downturn in values. Still, priced below their industry peers, these REITs have a potential for long-term capital gains. In addition to high yields, they also boast strong potential for dividend growth in the future, likely at rates that exceed the rate of inflation. However, as with most other REITs, risks associated with rising interest rates should be taken into consideration. 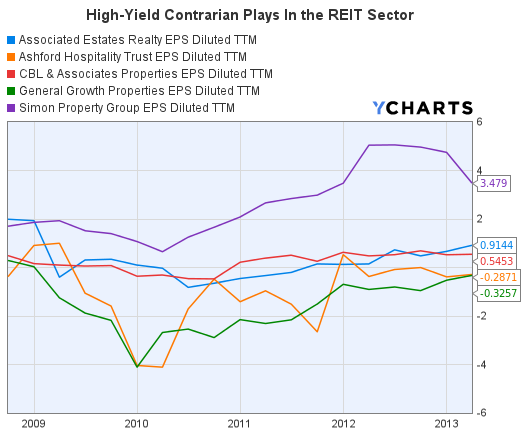 CBL Properties (NYSE: CBL) today announced that its Board of Directors has declared a special dividend of $2.20 per share of common stock, payable all in cash. The Special Dividend is payable on January 18, 2023, to stockholders of record as of the close of business on December 12, 2022. The special dividend equates to an aggregate cash amount of approximately $70.0 million.... Read more

CBL Properties (NYSE: CBL) today announced that its Board of Directors has declared a dividend of $0.25 per common share, payable in all cash, for the quarter ending December 31, 2022. The dividend, which equates to an annual dividend payment of $1.00 per common share, is payable on December 30, 2022, to shareholders of record as of December 1, 2022.... Read more

CBL Properties (NYSE: CBL) today announced that its Board of Directors has established a regular quarterly cash dividend. The Board of Directors declared a dividend of $0.25 per common share, payable in all cash, for the quarter ending June 30, 2022. The dividend, which equates to an annual dividend payment of $1.00 per common share, is payable on July 20, 2022, to shareholders of record as of July 11, 2022.... Read more