Prudent income investors generally pursue stocks with consistent dividend payments and dividend growth over time. When it comes to consistent dividend growth, some water utility stocks exemplify exceptional records of consecutive annual dividend increases that stretch over several decades. As public utilities, water companies have a degree of revenue and cash flow stability through different economic cycles amid an inelastic demand for their services. Generally, these companies have low operational risk and represent investments with lower volatility of returns than the broader market. When these attributes are complemented with attractive dividend yields, it becomes obvious why some income investors see an investment appeal in water utility stocks.

The table above features four water utility companies with impressive records of dividend growth over time. All four are small-cap stocks currently priced at elevated valuations; however, their above-market yields and dividend consistency –which has proven both recession-proof and supported by favorable long-term demand fundamentals– support investor interest in these stocks. That investor interest is evident from a respectable run-up in the prices of these stocks over the past 12 months. Among the four presented stocks, American States Water (NYSE: AWR) has seen the most robust appreciation in value over the past year, as the company has seen robust earnings growth and has implemented generous dividend increases in the past two years. Still, Middlesex Water (Nasdaq: MSEX) pays the highest dividend yield, but its room for substantial dividend growth in the future is constrained by its elevated payout ratio. In principle, all featured stocks except for AWR have been implementing modest annual dividend increases.

American States Water is a multifaceted business, which, through its subsidiaries, provides water service to one out of 36 Californians, distributes electricity, and provides water and wastewater systems operations, maintenance and construction management services in U.S. military bases. The company has paid regular dividends since 1931 and has increased them each year since 1954. AWR hiked its dividend by 27% back in September 2012 and announced in late May 2013 a new 14.1% dividend increase slated for the third quarter of 2013. The company has also decided to implement a two-for-one stock split, with shareholders receiving one additional share of AWR stock for each share they own as of close of business on August 15, 2013. AWR holds that the dividend hike and the stock split “enhance” its ability to raise funds for infrastructure investments. The company recently agreed to acquire Rural Water, serving some 940 customers in Arroyo Grande, California. AWR has a favorable regulatory environment, which supports its financial stability and dividends. Reflecting low volatility of its returns relative to those of the broader market, AWR has a beta of only 0.4.

Another California-based water utility is California Water Service (NYSE: CWT), serving some two million customers in four western states (California, Washington, New Mexico and Hawaii). CWT is the “largest investor-owned American water utility west of the Mississippi River and the third largest in the country”. The company has paid a dividend every year since 1945 and has increased it each year since 1967. The company's operations are supported by strong demand fundamentals, given CWT's presence in high-growth areas of the United States. After filing a general rate case back in July 2012, the company is expecting a new rate decision by the end of this year, with new rates, if approved, effective as of January 1, 2014. The latest rate case was the largest in the company's history, requesting increases of 19.4% in 2014, 3.0% in 2015, and 2.9% in 2016. Like its peer AWR, this stock has a low beta of only 0.4.


Also California-based is SJW (NYSE: SJW), a company that has been providing water services since 1866. This diversified utility company operates water services in San Jose, California and Texas as well as a real estate services company. The company and its predecessors have paid dividends for 278 consecutive quarters, and the annual dividend payout has increased in each of the last 45 years. Almost all revenues of SJW's water utility subsidiary San Jose Water are regulated. Given the company's relatively low payout ratio, future dividend hikes are likely in the cards.

Middlesex Water was established in 1897. It provides a range of regulated and non-regulated water, wastewater utility and related services in parts of New Jersey, Delaware, and Pennsylvania. The company has been paying a dividend since 1912, and has raised it for 40 consecutive years. Some of MSEX's strong points include its operating in a “supportive regulatory environment” as a “low-risk monopoly water distribution business.” This company's revenues are thus secured through regulated utility services, which account for 89% of total annual revenues. MSEX has a solid balance sheet and an investment grade rating. As regards its operational performance, the company reported a 14.8% year-over-year increase in first-quarter consolidated operating revenues, with a nearly 76% increase in net income. Still, this growth is accompanied by rising operating and maintenance costs. The stock offers a competitive dividend yield with a prospect of modest dividend growth in the future.

In conclusion, water utility stocks paying regular dividends can be a source of dependable dividend income. As discussed above, some have paid and grown dividends for decades. Still, the appeal of these stocks has bolstered their valuations, which is a relevant factor when choosing an appropriate entry point. 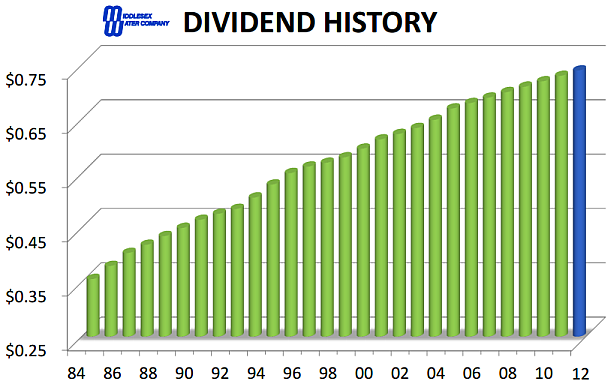