Many analysts and fund managers have been bullish about the semiconductor industry for a long time. While this industry has been viewed primarily as a growth sector, in recent years several industry players have emerged as appealing income plays for yield-seeking dividend investors. Two dividend-paying companies in the sector currently stand out, namely Intel Corporation (Nasdaq: INTC), a renowned chip maker, and Applied Materials (Nasdaq: AMAT), the global maker of semiconductor equipment. In cumulative terms, these two semiconductor companies have boosted their dividends by 260% and 600%, respectively, and have seen the dividend yields on their stocks surge since 2005 (see the charts below).

What's more, at the pace of dividend increases over the past three years, the companies are expected to double their dividend payouts in 5 years, likely faster than some traditional income plays such as Wall-Mart (NYSE: WMT) and McDonald's (NYSE: MCD). 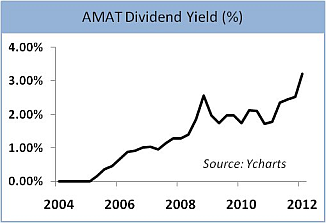 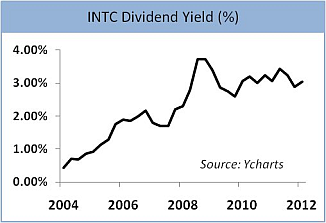 This year, improvement in capital and consumer spending, albeit slow, has propped up stocks of some chipmakers, including Intel. From the beginning of the year, Intel's stock has jumped 13.4%. As much as this jump is based on improvement in the macroeconomic environment, it is also specifically based on the expected rebound in chip demand of some 3% in 2012 and another 5% in 2013, according to Standard and Poor's. Notwithstanding some recent reports from the company's rivals about a slowdown in sales in Europe, Intel sticks to its sanguine forecasts. In line with those forecasts, analysts expect Intel to boost its earnings per share (EPS) in the coming years. According to Finviz.com, Wall Street analysts' consensus estimates call for a 10.6% growth per year in Intel's EPS over the next five years, which is higher than EPS growth realized over the past five years.

An expected improvement in financial performance is likely to support continued increases in dividends in the coming years. Currently, Intel is paying $0.84 a share in dividend annually, which equals to a dividend yield of 3.10%. This yield is 60 basis points above the industry's average yield and a full percentage point above the yield on the S&P 500. It is also well above the paltry 1.85% yield on the 10-Year Treasury bond. Intel has a low dividend payout ratio of 33%, which means it only pays a third of its earnings in dividends. The company has been growing dividends at an average rate of about 31% per annum since 2002, and about 14.7% annually, on average, over the past three years. At the rate of dividend growth over the past three years, Intel will double its dividend in five years.

In addition to this attractive aspect, it should be noted that despite the rally from the beginning of the year, Intel's stock remains undervalued by some metrics, including the price-earnings ratio (P/E). Trading at $27.85 a share, Intel has a P/E of 11.8 and a forward P/E of 10.4. These are well below the industry's averages of 17.9 and 15.7.

On the other hand, Applied Materials' stock has been out of favor among some investors because of a projected weakness in semiconductor equipment sales in 2012, following a nearly 14% increase in total global revenues in 2011, according to Gartner. The semiconductor equipment market is expected to rebound in 2013 with a 19.2% increase, which should improve Applied Materials' top and bottom lines. According to consensus estimates published by Finviz.com, the company is forecast to grow its EPS annually by 9.25%, on average, over the next five years. This rate of growth is higher than the average annual rate reported by the company for the past five years. The company's dividend yield and valuation look attractive. Applied Materials pays $0.36 in dividends annually, which translates into a current dividend yield of 3.20%. This yield is 120 basis points above the yield on the industry as a whole and the S&P 500, and 135 basis points above the current yield on the 10-Year Treasury bond. At present, Applied Materials pays only 21% of its earnings in dividends. The company has been growing its dividends at an average annual rate of nearly 37% since 2005, or a bit slower by 14.6% per year over the past three years. Assuming that it will continue to hike its dividend at the 3-year average annual growth rate, Applied Materials, like Intel, will double its dividend in five years.


As regards valuation, the company is currently undervalued and is flirting with oversold levels as measured by the Relative Strength Index (RSI), a technical indicator of momentum. The stock is trading at $11 a share, with a current P/E of 9.6 and a forward P/E of 9.9. These price-earnings ratios are well below the industry's average ratios of 17.9 and 15.7. Based on information available on Gurufocus.com, even popular fund managers are bullish about these dividend growth plays. The famous financier Warren Buffet purchased Intel's stock in the fourth quarter of 2011. Fund managers John Hussman of Hussman Econometrics Advisors and Tom Gayner of Markel Gayner Asset Management followed his suit. As regards Applied Materials, John Hussman added the stock to his portfolio in the first quarter of 2012, while Joel Greenblatt of Gotham Capital purchased it in the fourth quarter of last year.

While most income investors will continue to look for dividends in the traditional sectors such as utilities and tobacco, they should be aware that opportunities to earn a meaningful yield exist even in non-traditional industries. Robust dividend growth of some technology firms, such as semiconductor companies, points to a new sector that promises to create above-market returns.

Seeking AlphaDividend Quick Picks3 Undervalued Dividend Stocks For Christmas: Lanny's Christmas ListDec. 25, 2020 2:30 AM ET|| Includes: INTC, PFE, SJMby: Dividend DiplomatsDividend Diplomats Large-cap, Dividend Investing, Dividend Growth Investing, ValueDividend Diplomats .cls-1{fill:#024999;}SummaryIntel is going to be the dominant player in the industry, as many other industries and companies in and outside of technology rely on its chips.Nearly 3 million doses of Pfizer's... Read more