Legendary investor Warren Buffett has popularized investing based on investment principles that emphasize economic moats. In his own words, his investment targets have been companies with “long-term competitive advantage (“an enduring moat”) in a stable industry”. A “wide moat” represents a sustainable competitive advantage or a barrier that protects a company from its competitors. Having a wide economic moat can mean that the company is able to sustain strong profit margins despite its competition, which gives it capacity to earn excess profits. Hence, companies with wide moats generally tend to have strong returns on invested capital.

Applying a proprietary methodology to identify companies with sustainable competitive advantages (i.e. wide moats), Morningstar has developed a Morningstar Wide Moat Focus Total Return Index. As an investment instrument, the index is available as an exchange traded fund (ETF), the Market Vectors Wide Moat ETF (MOAT), offered by Van Eck’s Market Vectors brand of exchange-traded products. According to Market Vectors, “of the broad equity universe analyzed by Morningstar, currently about 10 percent receive a wide moat categorization; the 20 stocks with the most attractive valuations are selected for its Index”. Hence, in addition to wide economic moats, the stocks selected for the index (and its corresponding ETF) have strong value attributes.

Among the 20 constituents of the wide moat index and its corresponding ETF, there are three financial stocks that pay dividends. These stocks represent companies that not only have enduring competitive advantages in their respective industries, but they also carry attractive valuations. The following table features their main profiles and dividend characteristics.

Western Union is the world’s largest money transfer company. Last year, it achieved total revenues of $5.7 billion and operating profit of $1.3 billion, providing services to some 70 million senders and receivers as well as to some 100,000 business-to-business customers. Its competitive advantage stems from its large scale of operations and a market-leading position in a regulated industry with significant barriers to entry. The company has experienced some challenges amid price cuts to maintain a competitive advantage over its peers such as Moneygram International (NYSE: MGI). As a result, WU expects a low single-digit drop in revenues this year and a decline in its EPS. Still, the company projects it will return to both top-line and bottom-line growth in 2014 and 2015. WU is a major cash flow machine, expected to generate GAAP cash flow from operating activities of approximately $900 million this year. Out of that, in 2013, it plans to distribute approximately $700 million in a form of dividends and share buybacks.


BNY Mellon is a leading investment management and investment services company. In fact, it is the eight largest U.S. financial holding company by assets and the world’s largest custodian bank. Moreover, this corporation is the leader in U.S. broker-dealer services, the leader in corporate trust services, the largest U.S. clearing firm, and the eight-largest U.S. wealth manager. Its leading position and a broad investment services and management exposure gives it an edge over competitors in its industry. The company reported $13.6 billion in revenues for the year ended March 31, 2013 and pretax profit over the same period of $3.5 billion. The company’s strong attributes include a business model dependent on fee-based revenues (80% of the total) that assure relatively consistent core earnings performance, relatively low exposure to equity market fluctuations, and strong balance sheet and credit quality. The stock is one of Warren Buffett’s core financial holdings. In fact, Berkshire Hathaway ranks BNY Mellon Corporation’s 10th largest institutional investor.

Franklin Resources is an asset management holding company, operating as Franklin Templeton Investments. The company reported its subsidiaries held some $834.1 billion in assets under management at the end of July 2013. The company has seen record operating profitability in recent fiscal periods and record average assets under management. Globally, more than 80% of the company’s long-term ranked assets were in the top two Lipper quartiles at the end of the June 30, 2013 quarter. UBS recently added this stock to its list of “Quality Growth at a Reasonable Price” stocks (read more about it here). Franklin Resources recently implemented a three-for-one stock split in the form of a stock dividend that was distributed on July 25, 2013.

In conclusion, there are a few wide-moat companies with reasonable valuations. Some of them pay attractive dividend yields and can appeal to dividend investors pursuing the Buffett-like investments with a competitive edge that can support strong margins over the long term. The three stocks featured in this article are good examples of favorably valued financials with a wide economic moat that distinguishes them from their peers. 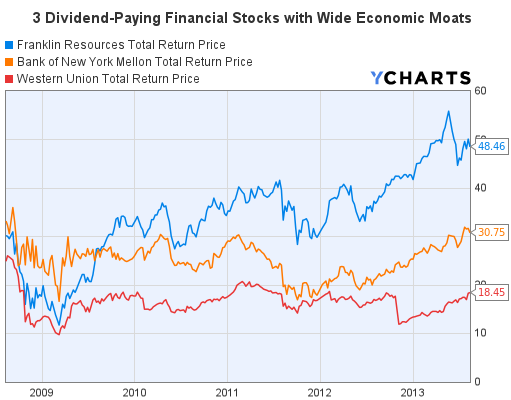