Popular valuation metrics focus on price-to-earnings ratios. However, a stock’s relative value can also be measured by comparing its price per share to its book value per share, whereby the book value is represented as the company’s net worth (the difference between the company’s assets and liabilities). Stocks that trade below book values theoretically may be priced below their liquidation values, which may signify a discount to the companies’ net worth. While the universe of such stocks is not so large, there are a few dividend-paying stocks boasting low levels of long-term debt relative to equity and trading below book value.

The following table features the main profiles and dividend characteristics of three dividend-paying stocks with low levels of debt relative to equity and market prices per share below the companies’ book values per share.

Among the three featured stocks, ManTech International (Nasdaq: MANT) pays the highest dividend yield; however, it has not grown its dividend over the past 12 months and its payout ratio is higher than that of the other two featured stocks. While Fresh Del Monte Produce (NYSE: FDP) has a lower dividend yield, it has realized the highest dividend growth over the past 12 months and the best total return year to date. On the other hand, while the total return performance of ASM International (Nasdaq: ASMI)(Euronext Amsterdam: ASM) has been weak this year so far and its dividend yield is modest, the company made a large extraordinary cash distribution at the end of July 2013.

Fresh Del Monte Produce is a global leader in fresh produce production and distribution, with especially large market shares in the supply of pineapples and bananas. North America is its largest market, accounting for 53% of Fresh Del Monte Produce Inc.’s net sales in 2012. Net sales to Europe, Asia and the Middle East regions accounted for 21%, 12%, and 11% in 2012, respectively. In the first six months of this year, the company made total net sales of $1.94 billion, an increase of 4.7% over the same period of the prior year. However, its total net income for the first six months of this year was $103.8 million, about 14.4% below that in the same period a year earlier. According to Finviz.com, the company has a long-term debt to equity of only 7% and is currently trading at a 10% discount to book value, according to data provided by Morningstar. The company’s current price-to-book is consistent with its five-year average price-to-book ratio. Aside from low valuation, the company’s dividend growth looks appealing, especially given that the stock has plenty of room to boost payouts in the future.

ManTech International provides cyber security, IT and intelligence services. The company generated some $2.6 billion in net income in 2012. It also has strong cash flow generation, with last year’s operating cash flow exceeding the company’s net income by 1.3 times. Given that the company’s capital outlays are low (at $15 million in 2012), ManTech International Corporation has plenty of room to finance a generous dividend and acquisitions for growth. In fact, the company plans to pursue acquisitions aggressively this year. However, the sequestration and general budgetary austerity have weighted heavily on the company’s financial performance, in particular due to lower defense outlays in Afghanistan (Overseas Contingency Operations (OCO)). As a result, the company has lowered its 2013 forward guidance for both revenues and earnings per share. However, this company is valued at only 90% of its book value, which is significantly lower that its historical average ratios. The company also has long-term debt to equity of only 17%, according to Finviz.com data. ManTech International Corporation’s free cash flow yield is also attractive at 7.7%, according to the same source.


ASM International is a Netherlands-based supplier of semiconductor equipment, materials and process solutions for the wafer processing, assembly & packaging, and surface mount technology markets. The company realized sales of $1.87 billion in 2012. Given the challenging operating environment in the semiconductor industry, the company’s sales were down 13% year-over-year last year. While the semiconductor capital equipment market is expected to decline by 8.2% this year, it should rebound as of 2014 by a robust 18.6% year-over-year. Both ASM front-end and back-end markets should improve significantly in 2014, with the front-end market starting a recovery this year. In fact, in the second quarter of 2013, the company saw a robust increase in both bookings and sales. After selling an 11.9% stake in ASM Pacific Technology, its back-end operations, for $550 million earlier this year, the company distributed 65% of the sales proceeds to its shareholders in a form of a special dividend. ASM International has negligible long-term debt and trades at a 30% discount to book value, according to Morningstar. This discount is significant, given that the company’s shares traded at 2.5x book value, on average, over the past five years.

While price-to-book ratios are useful as valuation metrics, they still may suffer from deficiencies. Often, assets may be mispriced and there may be a need to write them down. Other issues may arise, such as problems with liquidating inventory or collecting receivables. Still, price-to-book ratios should be relevant supplement to price-to-earnings ratios when it comes to stock valuations.

As shown above, there are companies with low levels of debt relative to equity that are trading at discounts to book value. Some of them pay attractive dividend yields and may be appealing investments for value-oriented dividend investors. 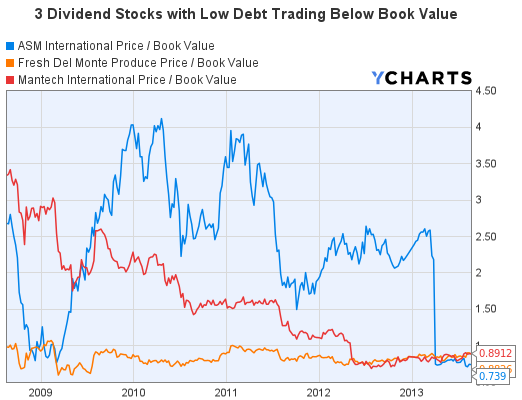 Mid-cap stocks have done quite well this year. The return of the S&P MidCap 400 index year-to-date is at 27.32%, while the return of the S&P 500 index during the same period is at 25.87%. In my previous post, I described the best S&P 500 dividend stocks according to Buffett principles. In this article I describe the best mid-cap dividend stocks which are included in the S&P MidCap 400 index, according to the same principles. A Ranking system sorts stocks from best to worst based on a set of... Read more

Many investors prefer using free cash flow instead of net income to measure a company's financial performance because free cash flow is more difficult to manipulate. Free cash flow is the operating cash flow minus capital expenditure. I have searched for very profitable companies that pay rich dividends and that have a very low price to free cash flow. Those stocks would have to show a very low debt and robust earnings growth prospects. I have elaborated a screening method, which shows stock... Read more

I have searched for very profitable tech companies that pay rich dividends with not too high payout ratios. Those stocks would have to show a very low debt and have their enterprise value well below their market cap. Enterprise value is calculated as market cap plus debt, minority interest and preferred shares, minus total cash and cash equivalents. Since the enterprise value can serve as the theoretical takeover price of the company, when its value is well below the market cap it is possible... Read more

Since interest rates remain low as we start 2013, investors should be concerned about overpaying for yield. How can they know if the stock is overpriced by investors chasing income? We can use the Magic Formula to find attractively priced stocks in general. In a prior article, we showed that it could be restricted to picking dividend-paying stocks without detracting from its performance. Since the Magic Formula seems to hold up to limiting picks to dividend-paying stocks, this screening method... Read more