Some Canadian dividend-paying stocks, including a few that pay rich dividend yields, have seen a pull-back in recent months. Indeed, while the pullback reflects the flagging appeal of dividend stocks in general amid a surge in Treasury yields, there are still some fundamentally-sound dividend payers that offer highly competitive yields. Morningstar Canada Dividend Target 30 Index, comprising of 30 Canada-based dividend-paying stocks, provides a glimpse at a carefully selected set of fundamentally-strong Canadian companies with attractive dividend characteristics. Some index members offer yields in excess of 4.0%.

The following table features the main profiles and dividend characteristics of 12 stocks comprising the Morningstar Canada Dividend Target 30 Index that pay dividend yields of at least 4.0%. 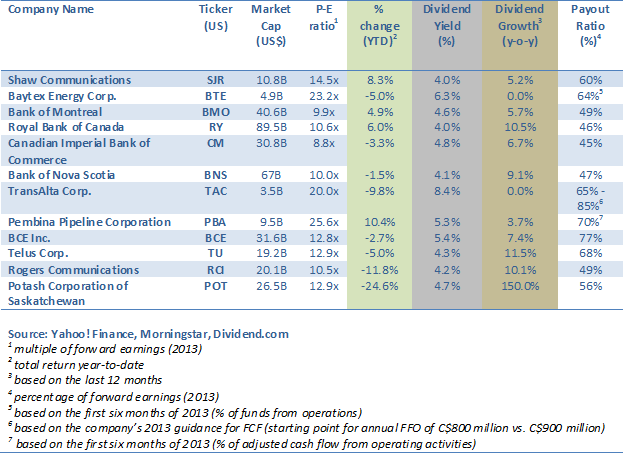 Three sectors –banking, communications, and energy– dominate the high-yielding stocks featured in the table. In fact, one third of the listed securities represents banking stocks, while another third represents stocks of Canadian communication companies. Among the featured high-yielders is also a fertilizer company, Potash Corporation of Saskatchewan (NYSE: POT)(TSX: POT), whose yield has been boosted by a combination of significant dividend growth over the past year and a recent steep stock price correction.

Among the featured 12 dividend-payers, Pembina Pipeline (NYSE: PBA)(TSX: PPL), an energy transportation and midstream services company, posted the best year-to-date total return. The company’s robust operational performance in the first six months of this year was a result of improved results across the company’s operational activities and due to the acquisition of Provident Energy, which closed on April 2, 2012. The improved operating performance and the acquisition helped nearly double the company’s adjusted cash flow from operating activities in the first six months of this year relative to the same period of last year. Moreover, in the first half of 2013, Pembina secured some $1.5 billion in capital projects (not including the proposed Cornerstone Pipeline), which, upon completion, should support the company’s long-term, sustainable returns.

On the other hand, Potash has demonstrated spectacular dividend growth in recent years; however, the stock has been battered recently as a Russian producer Uralkali pulled out of its cartel partnership with BPC Belaruskali. The cessation of the partnership is expected to cause a plunge in potash prices as Uralkali seeks to gain the market share through higher sales volumes and lower prices. Still, Potash generates large operating cash flows, and it could allocate more cash toward dividends as it moves away from investing for growth to enhancing shareholder value. (Potash capital expenditures are expected to more than halve in three years, which should help boost free cash flow). Since January 2011, Potash has hiked its dividend cumulatively by more than 950%.

As shown above, there are several Canadian companies offering high dividend yields. While those companies are concentrated in a few sectors, they still may be appealing to long-term income investors seeking dividend plays with solid or improving fundamentals. These 12 stocks are a good starting point in research of Canadian companies with competitive yields.