Dividend Boosters for More Than 10 Years

When it comes to boosting dividends consistently year after year, only a few stocks can take pride in having an admirable record of at least 10% annualized dividend growth, on average, for 10 years at minimum. With sufficient earnings power and robust cash flow, a select group of companies has been able to reward its shareholders with double-digit dividend increases, on average, for more than a whole decade. Stocks of these companies represent good starting points in research of proven dividend growth investments.

Focusing specifically at this particular category of dividend growers, Goldman Sachs has constructed a multiclass mutual fund, Rising Dividend Growth Fund, which invests in stocks of companies that have increased their dividends by 10% per year, on average, for at least 10 years in a row. The fund’s constituents are stocks of companies demonstrating financial strength that is evident in the companies’ capacity to pay significantly higher dividends over long-term periods. Illustrating the success of the fund’s dividend-growth portfolio is the fact that the fund’s portfolio has “experienced, on average, 23 years of consecutive dividend increases, with a 10 year average annual dividend increase of 18.7%,” according to Goldman Sachs.

The table below features the main profiles and dividend characteristics of five stocks comprising the aforementioned fund, with especially robust dividend growth over at least the past decade and current dividend yields above the yield on the 10-Year U.S. Treasury bond. All the following equities represent quality stocks with proven financial strength, long-term earnings capacity, and dividend sustainability.

Among the featured dividend-growth stocks, Harris (NYSE: HRS), a communications and IT firm tied to the government sector, offers the highest dividend yield. It has raised its quarterly dividend for 12 consecutive years. Given its modest payout ratio and strong free cash flow generation capacity, the company looks capable of extending the streak of dividend increases into the future. The tech bellwether IBM (NYSE: IBM) still has a lower payout ratio than Harris. Among the featured five stocks, three stocks –namely T Rowe Price (Nasdaq: TROW), Automatic Data Processing (NYSE: ADP), and Cardinal Health (NYSE: CAH)– are members of the S&P 500 Dividend Aristocrats Index, which testifies to these companies’ ability to generate strong earnings and cash flows over long-term periods in order to sustain robust dividend growth. In fact, Cardinal Health has significantly propped up its dividend hikes, increasing the regular quarterly payout by nearly 27% this year alone. The majority of the featured companies has shown robust total returns since the beginning of the year, with Automatic Data Processing and Cardinal Health leading the pack.

IBM is a tech giant with annual revenues of about $104.5 billion in 2012 and net income of about $16.6 billion. Last year alone, the company generated free cash flow of some $18.2 billion, which is $12 billion or three times larger than the amount realized a decade ago. The company has used the lion’s share of that cash to fund share buybacks, which cumulatively totaled $123 billion since the year 2000. In fact, through 2015, the company has committed to returning $70 billion to shareholders in the form of gross share repurchases (circa $50 billion) and dividends ($20 billion). (Some additional $20 billion will be spent on acquisitions.) IBM Corporation envisions growing its revenues through higher software segment revenues, expecting this component to account for half its total sales by 2015. The company is also dedicatedly investing in cloud computing. IBM expects to achieve its growth goals by expanding its operating EPS at a rate of 11% annually between 2010 and 2015. IBM has raised dividends for 18 consecutive years, including 10 years of double-digit percent increases. Its 10-year dividend growth averages 19.3%.


Automatic Data Processing is a payrolls processing and human resource outsourcing company. It is yet another S&P 500 Dividend Aristocrat. The company has raised dividends for 38 consecutive years. It generates approximately $11 billion in revenues, serving some 620,000 clients in more than 125 countries around the world. This company has substantial recurring revenues, which provides for strong, consistent cash flow. Given the company’s low capital requirements, its ample cash flow secures dividend payouts. Moreover, testifying to the company’s financial prudence is the fact that ADP is one of only four U.S. companies rated AAA by rating houses S&P and Moody’s. In addition to robust dividend growth over decades, the company has also allocated significant funds into share repurchases, reducing its total stock outstanding by about 10% over the past five years alone. Over the past decade, ADP’s dividend growth averaged 13.9%.

Cardinal Health is a $101 billion company that serves as a wholesaler of drugs and medical supplies. About 90% of the company’s revenues comes from its pharmaceutical segment. The fact that 85% of U.S. hospitals use Cardinal Health’s products and services speaks loudly about the company’s scale of operations. What bodes well for the company’s sustained profitability in the long run is the favorable demographic trend boosting demand for pharmaceuticals, increased prevalence of generics, and the company’s oligopolistic position in the drug distribution market. Cardinal Health is also an S&P 500 Dividend Aristocrat. The company has raised its dividend at an average annualized rate of 28% over the past 10 years. Its long-term objective is to produce an annualized total shareholder return of at least 11%.

Harris is a $6 billion company with a particularly pronounced exposure to the U.S. government funding. As a result, the company’s revenues declined last year amid U.S. budget austerity. However, the long-term outlook remains optimistic amid Harris’s international expansion and in the segment of the company’s RF Communications products. The company’s annual free cash flow generally exceeds its net income, and Harris remains committed to deploying capital through dividends and share buybacks. The company’s annualized dividend growth has averaged 27.6% over the past 10 years.

In conclusion, many respectable companies have produced dividend growth in excess of 10% annually, on average, over at least the past decade. With proven earnings and cash flow generation capacities over long-term periods and through different business cycles, these stocks may be interesting for long-term income investors pursuing rising income flows from dividends with a potential for capital appreciation. 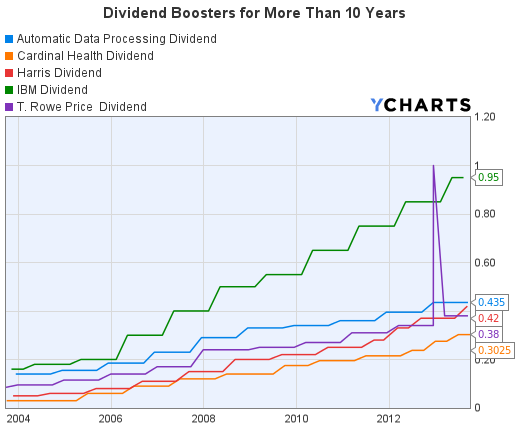 The IBM (NYSE: IBM) board of directors today declared an increase in the regular quarterly cash dividend to $1.64 per common share, payable June 10, 2021 to stockholders of record as of May 10, 2021.... Read more

Is This Dividend Stock a Growth Stock in Disguise? At first glance, CoreSite Realty Corp (NYSE: COR) does not seem to be anything exciting. Based on its name, you might think it’s a real estate investment trust (REIT), and you’d be right. CoreSite is a REIT headquartered in Denver, CO. Here’s where things get more interesting. Rather than owning apartments, office buildings, or shopping malls, CoreSite focuses exclusively on data centers. Right now, the company’s portfolio... Read more