Historical evidence from academic research suggests that there is an anomaly related to low-volatility stocks, observed in portfolios of the like securities, which indicates that higher expected rates of returns do not always correspond to higher assumed risk. Stocks with low volatilities of returns, perceived as less risky than high-volatility stocks because their returns do not fluctuate dramatically in either direction over short-term periods, have tended to produce higher risk-adjusted returns than their high-volatility peers. An explanation for that outperformance can be found in the tendency of low-volatility stocks to reduce drawdowns during market corrections. (For the reference, volatility is measured as standard deviation or variance of the stocks’ daily price returns over a particular period).

Out of the small- and medium-cap low volatility stocks comprising these indices, there are a few non-financial and non-utility stocks that yield about 2% and boast payout ratios that indicate potential for dividend growth in the future. The table below presents the main profiles and dividend characteristics of the four featured dividend-paying stocks.

Among the featured stocks, Hillenbrand (NYSE: HI) pays the highest dividend yield, although its dividend growth has been paltry at best. Still, its payout ratio can accommodate additional dividend increases in the future, especially if analyst expectations of an EPS CAGR of 12.5% for the next five years materialize. On the other hand, Hubbell (NYSE: HUB-B) and Lancaster Colony (Nasdaq: LANC) have lowest yields in this group; however, their dividend growth has been robust recently, supported by fairly strong EPS expansion and modest dividend payout ratios. In fact, when it comes to dividend growth, only few companies can beat Lancaster Colony’s record – it is one of only 16 U.S. companies to have raised regular dividends each year for 50 consecutive years. ABM Industries (NYSE: ABM) trails that record by only few years.

Hillenbrand is a global diversified industrials company consisting of two business platforms, the one leading in the design, production, marketing and servicing of equipment and systems used in processing applications and the other manufacturing and selling funeral services products. The company has paid cash dividends since 2008; however, its dividend growth has been meager. Hillenbrand’s revenue has grown robustly since 2009, and is expected to reach a CAGR of 25% from 2008 to fiscal year 2013. The process equipment segment of the firm now accounts for about two thirds of total revenues, whereas in fiscal year 2009 the funeral business accounted for full 100% of sales. The company’s acquisition of Coperion Capital GmbH, a compounding, extrusion and bulk material handling equipment company, is responsible for this and is expected to lead mid-to-high single digit revenue growth through 2017. The company aims to augment its current business mix with a new, third platform by 2017.

ABM Industries, a provider of building maintenance and facility services to companies in North America and internationally, has more than a century of experience in its business. In fact, it is one of the largest facility management services providers in the U.S. The company has an extensive record of dividend growth, albeit the rate at which dividends are growing is now hardly outpacing inflation. The company’s projected EPS CAGR is moderate at 5.9% for the next five years. However, its growth has been fairly strong in the recent quarter, with expectations that the robust momentum will be carried into fiscal year 2014. In its fiscal third quarter, ABM Industries reported revenue growth of 12.8% year-over-year and adjusted EBITDA growth of 14.9% year-over-year. Aside from raising dividends, the company has also been reducing its debt, as it continues to build up its free cash flow, which totaled $63 million for the nine months ended July 31, 2013.


Lancaster Colony produces specialty foods, glassware, and candles. This company’s dividend growth record, characterized by robust increases over the years and a still-modest payout ratio, testifies about the company’s earnings power over long periods of time. What’s more, the company has a debt-free balance sheet with some 21% of total assets in cash and equivalents. Lancaster Colony’s success has been a result of its high-quality brands. While Lancaster Colony’s financial performance in the first quarter of fiscal 2014 was relatively weak, with quarterly revenues down 2% and net income off by 7.1%, the company’s long-term prospects remain upbeat, as analysts expect an EPS CAGR of 9.7% for the next three-to-five years. This stock is a prime candidate for conservative, dividend-oriented portfolios focused on long-term dividend growth.

Hubbell is a manufacturer of quality electrical and electronic products for a range of construction, industrial and utility applications. The company has reached revenues of $3 billion in fiscal year 2012. Its growth strategy sees revenues exceeding $4 billion by 2017. At the same time, the forward-looking targets for the next three years include a 10% EPS CAGR (through 2017) and an increase in the operating margin of 150 basis points to 17%. The company has been a strong generator of free cash flow, which has regularly met or exceeded net income. Currently, the company has the lowest dividend payout ratio of the four mentioned stocks, which means that the projected EPS growth rate can support higher dividends in the future. The company’s most recent dividend increase, declared in mid October 2013, was said to reflect the management’s confidence in the strength of the company’s businesses and Hubbell's ability to generate strong cash flow.

The aforementioned four low-volatility stocks are good examples of dividend stocks boasting a solid potential for reliable income and dividend growth over time. They could serve as a basis for further research of low-volatility strategies involving small- and medium-cap stocks with reasonable yields and capital appreciation potential in the long run. 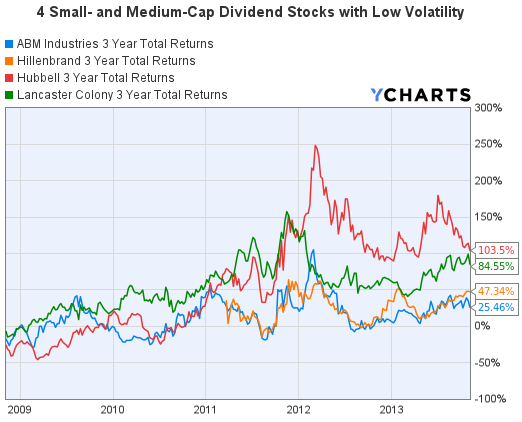 A weekly summary of dividend activity for Dividend Champions and Contenders. Companies which declared increased dividends. Companies with upcoming ex-dividend dates. Companies withupcoming pay dates. Introduction The Dividend Champions list is a monthly compilation of companies which have consistently increased their annual dividend payouts, and the latest edition may be found here. However, since this list is only produced once per month, the data in it can quickly... Read more