The Polar Vortex Has Failed To Turn Tables In Utilities Stocks

The Polar Vortex brought eastern U.S. to a stand-still as the New Year dawned upon us. With the unprecedented cold came an unanticipated rise in electric demand amidst low temperatures. While the majority of the retail customers is cushioned from short-term price hikes in fixed contracts, the brunt of demand surge will be felt by the utilities providers as gas prices shoot up and increase the cost of production. While this was a one-time event as the arctic blast brought havoc to the eastern U.S, annual episodes of such freezing temperatures could shoot a hole in utilities companies’ earnings. This article looks at three leading utilities companies of the U.S. that offer attractive dividends and show prospect of organic growth at a time when stringent environment and renewable energy laws are on a rampant rise. 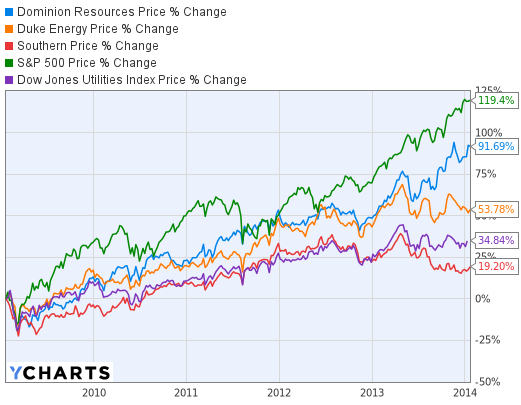 Duke Energy (NYSE: DUK) is the largest electric power company in the U.S., providing energy to approximately 7.2 million customers in Ohio, Kentucky and Indiana. Its market capitalization reflects the wide spread customer base, while its net income growth has grown by 18% on average over the past three years. That being said, the company’s recent mercury drop in mid-west will take a toll on Duke Energy if the proportion of fixed rate customers outnumber variable rate customers. While this is a variable point, it is confirmed that Duke’s energy mix is highly diversified and it will not bear the brunt of rocketing gas prices due to record-high natural gas storage withdrawals.
On the dividend front, Duke has an attractive 4.57% yield on its current price, while year-on-year growth has been less than impressive due to worsened margins in the previous year. Over the preceding year, the company’s net income remained stable and did not grow at all; hence, the stagnation in dividend growth is understandable. In the last fiscal year, Duke’s payout ratio was above 100%, which is bittersweet for investors since it means that the company is showing commitment to its shareholders by rewarding them in difficult times. However, the continued payout ratio above 100% suggests revenue trouble and cost escalation.

Amidst coal power financial clampdown, Southern Company (NYSE: SO) stuck with its coal fired power plants, despite firm opposition from legislation and Environmental Protection Agency. At the time, it looked as if the company had missed a trick and would now incur spiraling costs associated with operation and surcharges. Now that gas prices are skyrocketing, coal-reliant utilities stand to benefit. Southern Co. offers the best dividend yield out of the three big electricity providing utilities of U.S. at a payout ratio of 72.7%, while its growth rate stands at 3.1% - making it an attractive buy for long term dividend payments. Over the past three years, SO’s margins have been consistently improving, allowing it to have a larger bank balance to utilize. Unlike Duke Energy, Southern Co.’s net income growth has been inspired by these improvements in margins rather than outright increases in revenues.

Dominion Resources (NYSE: D) is the only company to have a negative net income growth over the past three years while still adding a 7.5% growth on its dividend over the past year. The company’s payout ratio is a staggering 370.2%, showing signs of grave financial trouble looming over the company. Unless Dominion Resources can generate additional income, the company will not be in a position to continue churning out such large dividend increases and payout ratios. Following such a course will not only be unsustainable, but will also put the company’s long-term future in doubt. Instead, investment in highly productive projects will be a more appropriate use of the company’s money. Expect yield, growth and payout ratio to decline significantly over the next years, unless the company pulls out a marvel to stem the loss. Currently, the company is offering a dividend yield of 3.39%. Moreover, the company has been increasing its dividends for the past 10 years at a dividend growth rate of 7.6%, while given its growth prospect it is most likely that the company will continue to increase the dividends at a moderate pace.

After going through the dividend breakdown and net income growth over the past three years, it is only logical to look at the valuations the stocks currently offer. Unsurprisingly, Dominion Resources is at the bottom of the list, as it struggles with income and has a large cost outlay. The company’s P/E ratio is a staggering 61.0, while Duke Energy and Southern Co. have their ratios standing at 20.1 and 22.4, respectively.

On the other hand, the PEG ratio incorporates growth prospects while providing valuation, making it a truer representation of the stock’s current standing. From this metric, Dominion Resources and Duke Energy look undervalued, since the industry average PEG ratio is 3.2. Southern, which initially appeared to be the stock best positioned due to easing coal prices, suddenly looks rather expensive at the current prices. Looking at stock performance of these three companies over the past 5 years, it becomes clear that investors are counting dearly on Dominion Resources’ future prospects.
The company plans to invest $5.8-$6.2 billion in its gas transmission business through 2018. Furthermore, new power generation projects in Warren and Brunswick County will add 1385 Megawatt to its already 23500 MW generation capacity. While the utilities sector has underperformed the market average of the S&P 500, Dominion Resources has outstripped the Dow Jones Utility Average Index and consequently, its competition too.

Gauging from the market expectations and current price trends, it becomes obvious that the polar vortex is expected to have a negative effect on the utilities companies’ fortunes rather than fill up their coffers. It is also safe to assume that most of the customers from the Mid-West to the East Coast are in short-term fixed utilities contracts, ranging from a minimum of 3 months or a maximum 36 months.
Either way, it makes sense why Dominion Resources has such a large payout ratio when its growth prospects are ventured in. The company wants to retain its investor base and as a form of incentive, continues to pay the high dividend while undergoing work on its project sites nears completion. Duke Energy and Southern do not have future prospects, yield or dividend growth that mirror their competitor.

Dividends By The Numbers In November 2020