Mining Into An Abyss: A Look At 3 Mining Equipment Stocks

Mining CAPEX is declining faster than originally thought. In 2012, analysts predicted that global mining CAPEX would decline 14% in the succeeding two years. However, global mining CAPEX is estimated to have declined by 26% already. Caterpillar (NYSE: CAT) is the world’s leading producer of construction and mining equipment and the company’s third quarter earnings plunged by 44%, while also being the worst performing stock on the Dow Jones Industrial Average in 2013. Earlier in January, Joy Global (NYSE: JOY)) was downgraded by Goldman Sachs, from neutral to sell. The company ended the year with net income down 30%, to $533.7 million, or $4.99 a share, and revenue down 12% to $5 billion. Komatsu (OTC: KMTUY) cut its full-year operating profit target by 31% to 210 billion yen on October 28th, citing slower demand from miners.
As suggested by an impending doom on the horizon for mining companies, the sector has been in a slump for years now and China’s slowing economy, which is focusing on inclusive and sustainable growth, is not helping the cause. This article searches for a ray of light, if there is one, for mining equipment stocks which will help investors make a smart decision before the rest of the market. 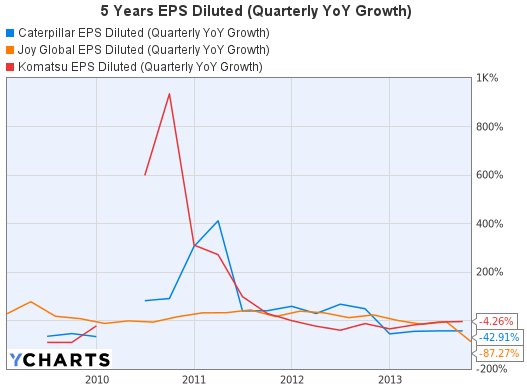 Caterpillar had a dismal 2013 in which it lost 17% of its sales in the first 9 months. Incidentally, the loss in sales is in line with the decline in mining. The fallout in business return is also reflected in overvaluation on the price charts as its P/E ratio is well above the competition. It is even more worrying that the company’s PEG ratio shows no encouraging growth for the medium-term future. While the company made mining its number one priority for future growth, construction and power systems divisions are also options which the company can hope to shift focus on in the future. Construction has been as disappointing as mining over the past three years ever since the global recession kicked in and purchasing power declined globally.
While Caterpillar’s net income growth stands at 85.2% over the past three years, the metric stands in negative when viewed on quarter-on-quarter basis, compared to the previous year’s quarter – in fact, it is a negative income growth of 60%. Similarly, revenue growth stands at 18.3% when viewed on a quarterly basis. The stock does offer the highest dividend yield out of the competition but a 2.54% yield is not convincing enough to buy the stock in a declining sector.

Joy Global and Komatsu are clearly smaller companies when compared with Caterpillar and thus should have worse growth prospects than the market leader. However, things are quite the opposite in reality. Unlike Caterpillar, the two companies have growth prospects which are far brighter in the future, as underlined by the low PEG ratios. Joy Global is shoring up machines to dig up copper and platinum and move away from its reliance on coal, halving its current make up of 65%.
Komatsu is the world’s second-biggest maker of construction equipment by sales, and it expects spending on disaster reconstruction and prevention, as well as preparations for the 2020 Tokyo Olympic Games to boost earnings in its home market. The company expects to boost its sales to global mining companies after the Japanese government approved a disaster prevention bill which would require machinery to strengthen seawalls and buildings. As part of its sales drive, the company is rolling out automated bulldozers in order to work close to Fukushima nuclear plant, an area which might be affected by leaked radiation from the 2011 disaster.

The graphs below illustrate stock performance of the three companies over the course of the past five years and one year. In comparison, the Standard and Poor’s 500 Index and Dow Jones Industrial Average have also been added and a torrid 2013 is the first thing which catches the eye. The mining and construction industry has been anything but prosperous as shown in the graph, and almost all of the world’s largest mining and construction companies have seen their prices depreciate in double figures. On evidence of recent troubles, it will be wise to stay away from these stocks. 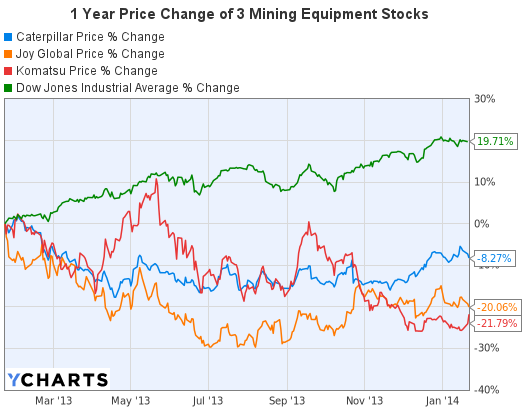 The five year perspective shows large volatility in prices for the three stocks due to fluctuations in demand and prices of coal and other mining metals. 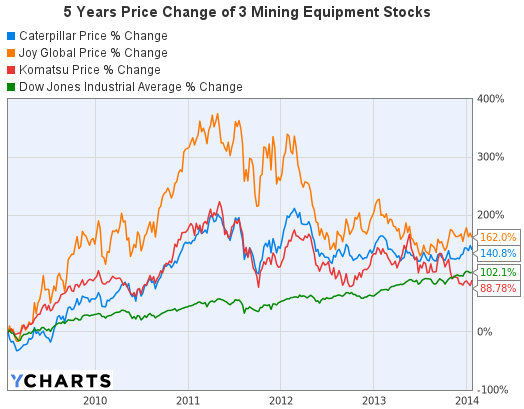 On the dividend front, the three machinery makers do not offer much in the form of regular cash payments. Joy Global has not increased its dividend for the last four years, while Caterpillar’s growth rate lingers at 8.8%. What may come as a surprise is Komatsu’s 143% – however, the company makes payments in Japanese Yen which is a lot less valuable than U.S. dollar and thus, it would not be accurate to make a direct comparison. Currency adjusted, the dividend has shown a 1.4% growth over the last year.

None of the three options provide convincing yield options, nor is the payout ratio reflective of the companies’ intention to increase payments to investors. Despite having considerable income and revenue growth in the previous years, Caterpillar has continued to grow dividend at a slow but constant pace, while the same cannot be said for Joy Global and Komatsu.

Simply put: mining and construction are a bad buy at the moment. If investors are looking to the price charts to bottom out and find the right entry point then perhaps their interests will be better served by other industries which do have global demand and less volatile industry trends to back them up. On evidence of the data available, the mining sector will continue to weigh down large machinery makers unless global demand picks up for metals or the companies become less reliant on coal mining.

The 6 Best Dividend Aristocrats To Buy For 2020

The S&P 500 is once more back to record highs, as has been the case 34% of the time since 1945. The broader market is 14% to 24% overvalued.Short-term pullback/correction risk is very high, so good risk management is more important than ever.PII, MDP, CAT, GD, GWW, and MO represent the six best dividend aristocrat/kings/champions you can buy for 2020 and well beyond.This article walks you through how I screen for dividend growth streak, valuation, return on capital (quality),... Read more

A Few Good Dividend Growth Stocks In The S&P 500