Gambling on Oil: Play The Market, Not The Odds

At a time when the markets are dominated by talk about technology stocks and the growing effect of hand-held consumerism, it is surprising to see that oil producers are still some of the most valuable companies in the world. According to International Energy Agency, the U.S. will become the largest producer of oil in 2020 and energy self-sufficient in 2035. The price of oil and it’s availability in a region largely determine the dynamics of an accompanying economy; oil shocks are translated into inflation figures and stifle economic growth, due to reduced purchasing power. Hence, investors maintain heightened interest in the companies involved in upstream and downstream operations of oil. Furthermore, oil stocks will continue to be an attractive prospect for investors who are looking for innovation and efficiency demanding companies. Here is an analysis of where you should be looking to invest in the oil sector.

Exxon Mobil (NYSE: XOM) has the largest absolute refining capacity in the U.S. and second largest brand revenue after Royal Dutch Shell (NYSE: RDS-A). Exxon Mobil stock gained 14% on its price over the last 12 months and has left its competition far behind on the stock market. Shell’s fourth quarter performance is being touted to be borderline dismal; so much so that Shell itself predicts its earnings to fall by 48%. The third option in the oil producing and refining business is Chevron (NYSE: CVX), whose interim Q4 report showed a negative outlook in upstream business. Over the last four quarters, earnings have been decreasing while revenues have been increasing. This caused conflicting feelings about recent earnings announcements, making Chevron a poor year-to-date performer.

Exxon Mobil and Chevron are more U.S. centric, while Shell has the geographical advantage of having its assets spread out across the world. On the flip side, Shell struggles with slow growth since its assets are not consolidated. The geographical diversification hedges the company from political, economic and social busts, but deprives it of the ability to change its product mix swiftly. The hypothesis is given credence by the PEG ratios of the three companies, which play in favor for the U.S. centric Exxon Mobil and Chevron. With an industry average P/E ratio of 9.7, the three stocks are overvalued and unattractive for a price conscious investor who is looking for a bargain. The PEG ratio is a more appropriate measure of valuation, as it ventures growth into the calculation and provides the larger picture.
The PEG ratio of 20.9 for Shell depicts slow growth prospects in the future, while the PEG ratio of 5.1 for Exxon Mobil suggests fast growth on a relative scale (see also the table below).

While Shell’s future looks bleak, its revenues in the recent times have outdone the competition. Over the past three years, Shell’s revenue growth has far exceeded its rival’s efforts, but the net income growth has been lower on account of higher costs of doing business. Surprisingly, Chevron is the clear leader for income generation growth over the past three years, despite being embroiled in courtroom battles in South America and Africa.
Chevron and Exxon Mobil have outperformed Shell over the last three years by relying on superior margins and a higher return on equity. A higher ROE is important for investors as it quite literally refers to ‘bang for your buck’. In other words, a higher ROE means a higher return per dollar invested in the company.

Speaking of returns, the graphs below illustrate the price movements of the three stocks over the past five years and one year, respectively. The 5-years graph provides an important snapshot of the oil sector’s protagonists since the year 2009. The oil market was in an artificial equilibrium in 2008 due to unsustainable levels of global demand. If 2008 was used as a starting point, the percentage price trend of the companies would be rather unattractive. 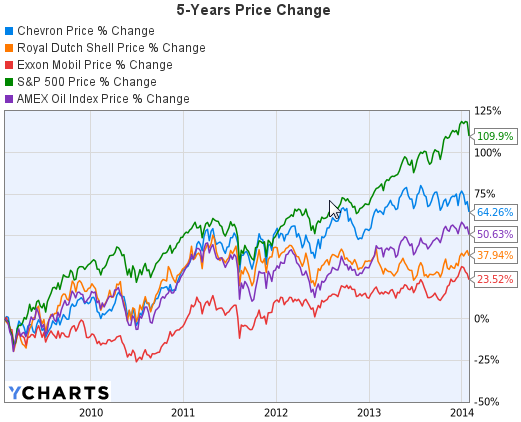 The oil sector has underperformed due to ageing oil wells and a dearth of new global oil deposits. Standard and Poor’s 500 index has more than doubled over the past five years in comparison to the AMEX Oil Index. The AMEX Oil Index is a price-weighted index of the leading companies involved in exploration, production, and development of petroleum. In a relative comparison, Chevron’s price appreciation of 63.12% is the clear leader over the past five years. 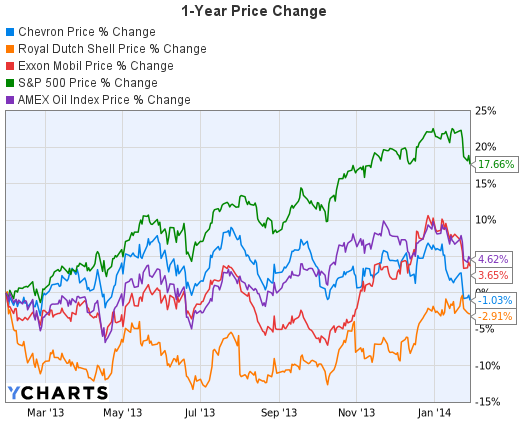 Over the past year, Exxon Mobil has shown large volatility in its price, but has been boosted by Berkshire Hathaway’s buy into the company, leaving a positive mood about the company’s prospects. Otherwise, the company’s stock price would not have seen appreciation over the year.

As is always the case with oil stocks, they offer large, reliable and high yielding dividends. Shell provides the most attractive yield and highest payout ratio amongst the three oil giants. While a high yield is desirable, the relatively high payout ratio might pose a problem for the company, as it expects to lose 48% of its earnings in the upcoming quarterly report. 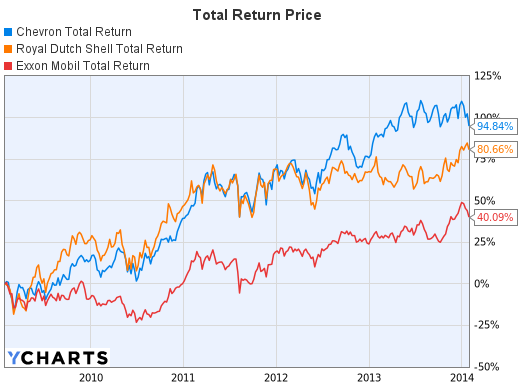 The illustration above shows the Total Return Price of the three stocks over the past five years. Essentially, it combines the capital movement and dividend given out by a company and plots it in a theoretical graph, to show the most rewarding stock. Earlier, it was mentioned that Exxon Mobil’s price has been unable to keep up with competition. After venturing the dividends into equation, Exxon Mobil’s return of value to its shareholders looks to be far lesser than competition.

Energy requirements of the world are undoubtedly going to increase exponentially over the next five years and the biggest consumer will be U.S. Hence, growth will be essential to capitalize on this growing demand. Primarily, Shell is at a disadvantage, due to the lack of concentration in North American and its impending fourth quarter earnings. The drop in earnings will also make it a far less attractive buy at the moment, since the stock price will probably go down after the earnings release.
That leaves Exxon Mobil and Chevron. Both have shown notable growth in the past and have good growth prospects to capitalize on the energy boom. From an investor’s point of view, Chevron’s stock makes a lot more sense due to its prudent management. At a time when its revenue growth has been overshadowed by competition, the company’s efficient margins have still allowed it to have a faster net income growth than its rivals.
Furthermore, the Total Return Price underlines the company’s value return to investors, making a strong case for investment into Chevron as the company ramps up spending in exploration and chemicals.

You Still Need Gasoline, So I Get Yields Of 13.5%: Global Partners LP